Australia have taken an unassailable 3-0 lead against India in the three-match series.

Melbourne: Following the three-wicket defeat in the third One-Day International (ODI)against Australia on Sunday at Melbourne Cricket Ground (MCG), Indian skipper MS Dhoni on Sunday said that it was his side’s poor fielding that led to the loss. He, however, praised his bowlers, saying that they displayed a much improved and decent performance. “Today, I felt on and off the bowling was decent. But we did let down with our fielding. The best fielders in the group, they actually left out the few deliveries. I felt in this game it was the fielding that has let us down,” Dhoni told the media after the defeat. With the win, Australia have also taken unassailable 3-0 lead in the five-match series. FULL CRICKET SCORECARD: India vs Australia 2015-16, 3rd ODI at MCG

Reflecting on the same, the 34-year-old said that there is an immediate need to evaluate the area in which his side were lacking and called on them to work upon it. “Also you have to see more than a series win, what is really happening, what are the segments where we are lacking. We have to improve as a team because it is not about the leader. What is more important to see is the areas where we are lacking. What are the departments which have to improve, especially when it comes to a shorter format,” Dhoni said. FULL UPDATES: India vs Australia 2015-16, 3rd ODI at MCG

The skipper also expressed his views on Virat Kohli, who became the fastest batsman in the world to reach 24th ODI century. Describing Kohli as one of the `best` Indian batsmen, Dhoni said that the former had a capability to take his team forward in the long run. “He is one youngster who has developed really well. I still remember the days when he was part of the side. He has constantly improved his performance. So, definitely, he is amongst the best in the Indian batsmen along with Rohit in the shorter format because he is also somebody who runs really well,” he added.

He was happy with the way his batsmen showed up. “The batsmen are working hard, but we’re always talking about 10-15 extra runs. This was a slightly different wicket, but there was not much the batsmen could have done. 295 was a good total.

“Rishi and Gurkeerat bowled well, so we somewhat covered up for Ashwin’s absence. There is some encouragement, it is tough when you lose games but you have to realise the bowling attack is largely inexperienced. It’s good to see Ishant bowl well in the middle, but when there’s a bit of pressure, the fast bowlers leak runs,” Dhoni said.

Earlier, Australia’s swashbuckling batsman Glenn Maxwell came out with a spirited performance to help his side chase down 296 runs at the slow wicket of the MCG. Australia reached the score with seven balls to spare, thanks to Maxwell, who smashed eight boundaries and three sixes, to provide his side with a series win. Besides Maxwell, opener Shaun Marsh (62) and skipper Steve Smith (41) were other notable figures for the hosts. READ: Glenn Maxwell: Australia desperate to whitewash India in ODI, T20I series

For the visitors, Umesh Yadav, Ishant Sharma and Ravindra Jadeja bagged two wickets each to provide their side with some hope but their efforts went in vain. 27-year-old Maxwell was adjourned `Man of the Match` for his remarkable contribution with the bat. Earlier, after being asked to bat first, Virat Kohli smashed 117 runs off 117 balls to help India post 295 runs, which was a par score on the slow MCG wicket.

Out-of form opener Shikhar Dhawan, who got dismissed cheaply in the first two ODIs, managed to contribute significant 68 runs before being dismissed by John Hastings. Ajinkya Rahane also smashed a half-century while opener Rohit Sharma got dismissed for just six runs after scoring centuries in Perth and Brisbane. The two sides will now play their fourth match, a dead rubber, in Canberra on Wednesday. 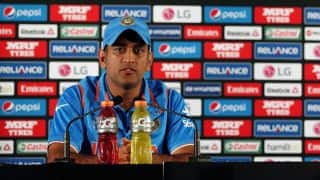