MS Dhoni inflicted a brilliant stumping to get rid of Upul Tharanga in the ongoing third ODI at Visakhapatnam.

What does MS Dhoni provide to the current Indian lineup? It is common debate in Indian cricket these days. Let’s take a quick precap into the former Indian skipper’s career:

MS Dhoni debuted in 2005. From an aggressor down the order, Dhoni’s ability to read the game situation and pass on vital judgments amidst former greats’ presence Sachin Tendulkar, Rahul Dravid, Sourav Ganguly, VVS Laxman, Anil Kumble handed him a surprise elevation as captain in mid 2007. Since then, he has led India to 2007 World T20I, 2011 World Cup and 2013 Champions Trophy. As a result, connoisseurs of the game jotted several articles on Dhoni’s astute cricketing skills. Even though he gave up captaincy in early 2017, he has remained proactive behind the stumps, assisting current skipper Virat Kohli for which he is reaping rewards and learning a lot in Dhoni’s presence.

Kohli has been rested from the current limited-overs leg against Sri Lanka. Rohit Sharma, the stand-in captain, has a task to ensure Sri Lanka remains winless in an ODI series in India. In the ODI at Visakhapatnam, Rohit’s absence led us back to good old days. Dhoni took over the mantle from Rohit, when the latter remained out of the park for a brief break. Dhoni guided the bowlers and changed field settings, taking spectators back to his glorious captaincy run.

In the current match, Dhoni has already inflicted a splendid stumping, dismissing Upul Tharanga for 95. In addition, this is Tharanga’s only score in 90s. 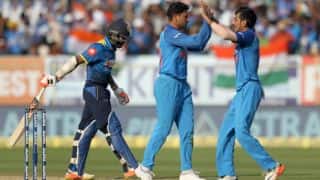