Mahendra Singh Dhoni on Wednesday sought to downplay it, saying that the youngsters in the team should not be deterred from going for big hits.

Ranchi: Poor shot selection contributed to India losing the fourth cricket ODI against New Zealand on Wednesday, but captain Mahendra Singh Dhoni on Wednesday sought to downplay it, saying that the youngsters in the team should not be deterred from going for big hits. Dhoni said telling the youngsters not to play big shots would lead to their going into a shell and that will not be good for their development. “The Nos 5 and 6 are quite new, they will learn their own way. Some will play big shots, some will take it deep. Cricket has changed, people like to play big shots,” Dhoni said after India lost the fourth ODI by 19 runs as the Kiwis levelled the five-match series 2-2. FULL CRICKET SCORECARD: India vs New Zealand, 4th ODI at Ranchi

“It is important to not tell them to stop playing the shots; you don’t want them to go into their shells. They played their shots when the ball was in their area. They will learn after they have played 15-20 games. Once they have played 15-20 games, they will figure out what works for them and they will serve [for the country] for long,” he added. Dhoni rued that giving away too many runs in the first 10 overs of New Zealand innings had an impact in the outcome of the match. India could only score 241 while chasing 261 for a win.

“I think it was the first 10 overs when we gave away a lot of runs and the extras. I think [chasing] 230 runs could have been decent, but we could have still chased 260 if we had wickets in hand,” he said. “Quite similar to Delhi where we kept losing wickets. Had there been wickets in hand we could have won. The wicket was best to bat on in the afternoon, and it kept getting slower and slower. The new ball under lights still came on but as it got older it became difficult. Had we got partnerships and accumulated runs we could have won,” he added. LIVE BLOG: India vs New Zealand, 4th ODI at Ranchi

The Indian captain said that his side will have to play their best in the fifth and final ODI in Visakhapatnam on October 29. “Usually there is dew at this time of the year, and in Indian cricket the moment you talk about dew you want to bowl first. We will have to be at our best in the decider.” An elated New Zealand captain Kane Williamson said that 260 was a good score and the total was possible due to having partnerships.

“Absolutely happy and proud. What we wanted was build partnerships. It was not an easy surface. Although you always want more, 260 was not a bad effort on that surface,” he said. Asked why he went for batting first after winning the toss in day/night matches, a choice against general trend in India, Williamson said, “Coming here, we had to decide between dew that may or may not come in versus the deterioration of the surface. The dew didn’t come in, so that perhaps worked in our favour. Martin Guptill, Tim Southee help Kiwis level series 2-2

On the decisions to drop Corey Anderson and Luke Ronchi, he said, “We have played on different surfaces so that affects selection. Also it has been a long tour. It’s exciting to go 2-2 in the series. India are a great side, it is exciting to go level into the final match.” Man-of-the-Match Martin Guptill said, “It certainly is a great feeling. To put up a performance myself and give the team a defendable total is satisfying.

“We thought we could have got more but it was a defendable total. It came down to our bowlers to do the job, and they did. Virat is a class player and to get him early was a big step,” said Guptill who scored 72 while opening the New Zealand innings. 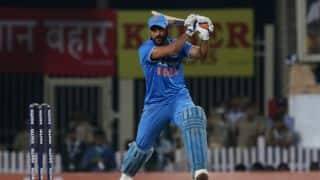