MS Dhoni: DRS could have changed the outcome of 1st India vs Australia 2015-16 ODI

MS Dhoni: DRS could have changed the outcome of 1st India vs Australia 2015-16 ODI

Perth: Indian cricket captain MS Dhoni has hinted at a conspiracy against the tourists following the team’s five-wicket loss to Australia in the first One-Day international match. Dhoni was unhappy with some of the umpires’ decisions after the match on Tuesday, particularly the one that saw George Bailey given not out, before he had scored, after he appeared to glove a catch down the leg side, reports Xinhua. Replays later showed the decision would have been overturned had the Decision Review System (DRS) been in action as the hot spot showed a mark on Bailey’s glove. Bailey (122 off 120), together with skipper Steve Smith (149 off 135) helped Australia chase down a challenging 310-run target with ease in 49.2 overs to win by five wickets. FULL CRICKET SCORECARD: India vs Australia 2015-16, 1st ODI at Perth

Dhoni did not hold back when questioned at his post-game press conference on Tuesday, saying the Indians were punished for failing to embrace the DRS technology. DRS is a technology based system that allows teams to review controversial on-field decisions in an attempt to rid the game of poor umpiring. “It could have [changed the outcome of game] but, at the same time, we need to push the umpires to make the right decision and you have to see how many 50-50 decisions don’t go in our favour and it always happens. Then (in that case) you have to take it, but I’m still not convinced about DRS,” Dhoni said.

“If you see the deviations in DRS, there are quite a few deviations, even the makers agree that there’s a bit of deviation that can happen. Now you have to also take into account whether it was given not out or not. If it’s given out, it needs to touch the stump, if it’s not out half the ball needs to hit the stump. That itself makes the variables too big and in cricket every inch matters, it’s millimetres that really matter.” READ: MS Dhoni feels India’s loss in 1st ODI vs Australia at Perth could be avoided if spinners bowled better

The president of the Board of Control for Cricket in India, Shashank Manohar, said in December that the Indians would not adopt DRS in one-day or Test match cricket until it became “foolproof”. Australia lead the five match series one-nil with the second game to be played in Brisbane on Friday. 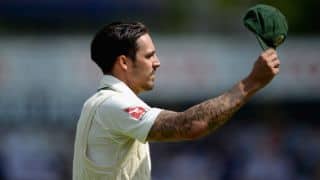