Dhoni is now 1 scalp away from being the first keeper to 100 ODI stumping.

MS Dhoni has etched his name in ODI record books. With the stumping of Danushka Gunathilaka, Dhoni equalled former Sri Lanka legend Kumar Sangakkara‘s ODI record of 99 stumpings. Dhoni levelled this feat in 298 ODIs, while Sangakkara played 404 ODIs. He is now one scalp away from being the first keeper to 100 ODI stumping.

Dhoni has picked 96 scalps off spinners. Meanwhile, this was also his 21st stumping against Sri Lanka.

Coming third in top five is Romesh Kaluwitharana, also from Sri Lanka, with 75 stumping from 189 ODIs. Former Pakistan keeper Moin Khan (73) is merely 2 stumping short of Romesh’s tally. Australia’s Adam Gilchirst completes a marvellous top 5 with 55 from 287 ODIs. Before Dhoni, Nayan Mongia held the record for most stumping for India with 44 from 140 appearances.

India are currently engaged with Sri Lanka in a 5-ODI series. They lead the series 1-0 after winning the first ODI by a massive margin of 9 wickets. 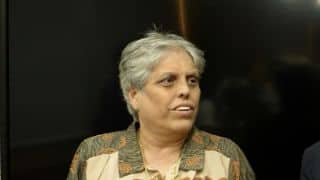