New Zealand all-rounder James Franklin feels Mahendra Singh Dhoni erred in his decision after winning the toss, and said the entire Kiwi outfit was surprised when the Indian skipper decided to bowl first in the second Twenty20 game at a relatively slow Chepauk pitch. New Zealand all-rounder James Franklin feels Mahendra Singh Dhoni erred in his decision after winning the toss, and said the entire Kiwi outfit was surprised when the India skipper decided to bowl first in the second Twenty20 game at a relatively slow Chepauk pitch.

“Honestly, India’s decision to field raised a few eyebrows in our camp. Having had the experience of playing IPL here, we always knew it was a win the toss and bat first pitch,” Franklin said after stealing a one-win win at the M Chidambaram Stadium in Chepauk.

Sent into bat, New Zealand rode on Brendon McCullum’s blistering 91 to post a competitive 167 for five on the board and then restricted India to 166 for four.

India, however, looked at ease till Virat Kohli’s (70) dismissal, but their chase fell apart when comeback man Yuvraj Singh (34) departed in the final over. Even though Dhoni remained unbeaten on 22, it was not enough to see the Men in Blue home.

“Our plan after Virat’s dismissal was to not let the new batsman settle in and get the required run-rate up and try to induce mistakes from them,” Franklin said.

“Dhoni is a big hitter, but the ball was gripping and stopping a bit on the batsmen. It was about bowling cleverly.”

Franklin also feels that yesterday’s narrow win over India will act as a morale booster for the Kiwis ahead of the ICC T20 World Cup to be played in Sri Lanka from September 18 to October 7.

“It has been a tough tour for us. We did badly in the Tests, but this (win) is definitely something we’ll celebrate.

It is good to end on a winning note ahead of the (T20) World Cup where we are heading from here,” he told reporters at the post-match press conference.

“But, we’ve to focus on our game and get better at what we’ve been doing and back ourselves to come good,” added Franklin, who starred with the ball for the visitors in yesterday’s game with figures of two for 26, which includes the crucial wickets of Kohli and Yuvraj.

New Zealand have been placed in a tough Group D in the T20 World Cup alongside former champions Pakistan and unpredictable Bangladesh.(PTI) 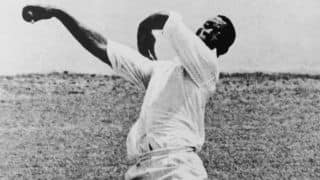 Wes Hall: Terror on the ground, religious off it

Yuvraj Singh - battles won off the field, the warrior returns to conquer the world