MS Dhoni faces pressure of captaincy in all three formats

MS Dhoni faces pressure of captaincy in all three formats

MS Dhoni has been leading India in all three formats since 2008.

Former Australian World Cup winning captains Allan Border, Steve Waugh and Ricky Ponting are of the opinion that leading India in all three formats of the game is troubling Mahendra Singh Dhoni, especially in Tests, and Virat Kohli must be groomed to take over the Test captaincy.

“Probably it is because he plays a lot, ranging all the three forms of cricket. He is a highly competitive guy and handles the pressures in One-Day Internationals (ODI) and Twenty20 Internationals really nicely. But the Tests are a different ball game,” Waugh said at the Aaj Tak Conclave Salaam Cricket here Saturday.

“In the five-day game, Dhoni looks jaded and worn out. Seriously, for Tests, India should start grooming Kohli and other guys to take over from him,” added Waugh, who led the Australian cricket team to the 1999 World Cup title in England.

Ponting, who led the Aussies to the 2003 and 2007 edition titles, said that tactical and strategic changes will help Dhoni, whose team lost back-to-back away Test series in England and Australia. “In ODIs and the matches held at home, he is happy to put fielders at boundaries and waits for the batsman to make mistakes with the support of the pitches which helps his set of bowlers. But these things don’t work in away tours,” said Ponting.

“Especially in Test matches, in places like Australia, England, you need to build the pressure from the beginning and don’t allow the game to continue. You not only need to restrict the flow of runs but also pick up wickets. So, it becomes troublesome for him.”

Border also echoed the duo’s sentiments. “Dhoni is a tough character. Particularly in Tests, he should be more active and should not let the game drift away,” said Border, who was the skipper of the Australian team which won the World Cup in 1987 in India.

“I don’t have any doubts about his commitment for the Test match. He is a very competitive guy. Also, he is leading India in all forms of cricket which is a huge task. But in these circumstances, the seniors of the team must contribute to the thinking part.” 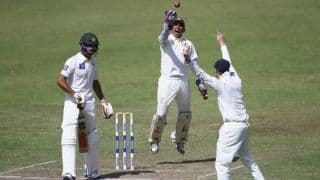