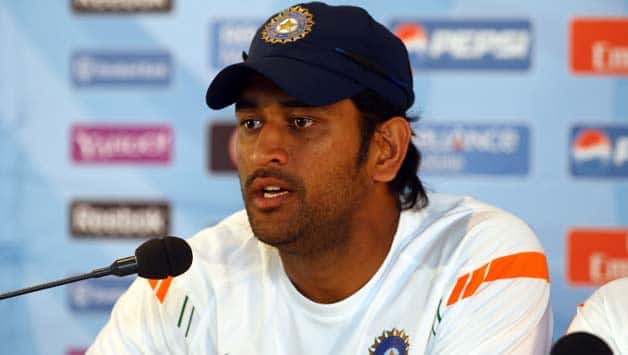 “Yes, we conceded a lot of runs in the last two overs.

…we got a good start but did not have enough wickets in hand in the last ten overs to put pressure on them. Had I stayed on for two more overs things could have turned out differently,” said Dhoni after his team’s nine-run defeat.

The power was switched off by SCA officials to conduct the sound and laser show for the assembled crowd that stayed on after the conclusion of the prize distribution function.

Dhoni had answered a few questions before power was switched off, which prompted him to ask if he “can call it a day”.

Victorious England captain Alastair Cook could not address the media at all.

India’s pace spearhead Ishant Sharma was taken to the cleaners for 20 runs in the penultimate over and then Bhuvneshwar Kumar gave away 18 in the final over.

Dhoni clouted four sixes in his whirlwind knock of 32 off 25 balls before he was dismissed by Jade Dernbach in the 45th over.

India, chasing England‘s imposing total of 325 for four, finished at 316 for nine.

Dhoni said the fast outfield made it even tougher to stem the flow of runs though he felt it was a 280-290 wicket.

“The outfield was very fast,” he said.

Asked why the team preferred Dinda over Shami Ahmed, who had made an impressive debut against Pakistan at New Delhi recently, Dhoni said the wicket at the Ferozshah Kotla was different.

“We knew Dinda can bowl yorker length balls but did not know how Shami can bowl on such a wicket,” said Dhoni.

Dhoni curtly said “no” when a local scribe asked him if the team management had erred in leaving out Cheteshwar Pujara from the XI as he came into the game on the back of his second Ranji Trophy triple hundred.

“As I said we needed to have wickets in hand but that did not happen. Had I stayed for two more overs, things could have been different,” he said.

Cheaper tickets for third India-England ODI at Ranchi sold out