MS Dhoni got into a traffic trouble and had to pay a fine of Rs 500 in Ranchi on Tuesday.

He did not break any rules though, while riding his vintage bullet, BSA Gold Star DBD (MHP-6518), it had a registration number on a vertical plate, attached to the bike’s mudguard. It is forbidden under section 122/179 of Motor Vehicle Act (MVI) reported Firstpost.

According to the Times of India, Traffic SP Kartik said, “The photo of the vehicle (published in newspapers) was brought to my notice. It violated rules related to display of numberplate. We had sent the chalan to his house and Dhoni’s family paid the fine and said he violated the rules due to ignorance.” 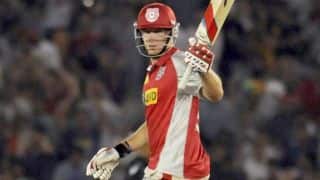