India captain Mahendra Singh Dhoni is happy to get a Test hundred after almost 21 months, scoring a fluent 144 in the first innings of the Kolkata Test against West Indies, where the hosts piled on 631 for seven batting first. 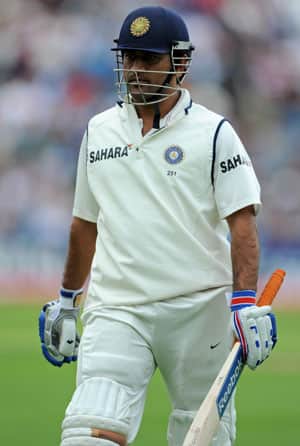 India captain Mahendra Singh Dhoni is happy to get a Test hundred after almost 21 months, scoring a fluent 144 in the first innings of the Kolkata Test against West Indies, where the hosts piled on 631 for seven batting first.

Dhoni clobbered five sixes and 10 boundaries during his knock of 144, which came from 175 balls. This was Dhoni s first Test hundred after February 2010, and coincidentally, it came at the same venue.

Since the South Africa Test in February 2010, Dhoni had a poor run in the Test format having scored only six half-centuries in 32 innings.

Dhoni said after the match, “It was a good wicket to bat on. From the pavilion end, when you bowl towards the other side, that was a bit two-paced. Throughout the Test match, more often than not the fast bowlers were bowling from this end that was the main reason. After we got off to a good start and the way Rahul (Dravid) played along with (VVS) Laxman, it gave us an ideal position.”

“We were in a (position) where (the) lower order comes in and tries to score runs at a brisk pace and initially I tried to play my big shots. It didn t pay off so I said (to myself), let s spend a bit more time, and once I was set we decided we needed to accelerate a bit,” he said.

“Later on, once their bowlers were tired and (Devendra) Bishoo was bowling a negative line around the wicket and you had (Marlon) Samuels bowling, we said, ‘Okay, this is the time we need to capitalise, get as many runs as possible because if we have to bat in the fourth innings, it won t be as easy compared to how we were batting at that point of time. Overall I think it was a good innings for me. Hopefully it was good for the (other) batsmen,” the Indian skipper added.

India lead the three-match Test series 2-0, and will eye clean sweep against the Caribbean side in Mumbai in the third Test starting November 18.

I am not worried about my 100th ton: Sachin Tendulkar