With Dhoni's announcement though, none of this really matters.

After salvaging a draw against Australia, India skipper Mahendra Singh Dhoni today expressed satisfaction with his team’s performance in the third cricket Test, which eventually turned out to be his last match in the longer format following his shocking retirement.

Australia had finished their second innings at 318/9 at lunch to set India an improbable target of 384 runs, out of which the visitors scored 174-6 with Dhoni himself holding the fort at stumps.

With the third Test ending in a draw, India slumped to another Test series loss abroad as Australia regained the Border-Gavaskar Trophy.

After the match, Dhoni announced his retirement from Test cricket with immediate effect but the 33-year-old did not give any hints of his impending decision when he had come to address the press conference.

Talking about the match, Dhoni said: “As a team, you want to win Tests. You look for a win, then a draw and then you fight it out so that you don’t lose the Test match. Our second innings bowling was very good but somehow we find ourselves in trouble and this match also we gave a lead of 60-plus runs.

“Their lower order contributed again and they had enough score to defend. It was very tough to score over 300 runs on this kind of wicket in one day. But overall I am quite happy.

We lost early wickets. We like to test ourselves in such situations and we put pressure on ourselves, and there wasn’t enough pressure on Australia. Overall it was a good performance by the team,” he added.

India struggled after tea when they lost Virat Kohli, Ajinkya Rahane and Cheteshwar Pujara in one passage of play, but then Dhoni and Ravichandran Ashwin played out the last hour without too much fuss as the players shook hands with four overs remaining in the day.

When asked if Australia played it safe by declaring late, Dhoni replied, “It is their territory, so let them decide what they want to do. It was up to them when they wanted to declare.

“To some extent the reason for late declaration was that in Adelaide the wicket was assisting the spinners and if we had a big partnership going here and played the number of overs, the result would have been in our favour. That’s what it suggests from the outside, so that would have played on their mind when deciding on the declaration.

“I was ready to play those four overs. I had played 14-15 overs until then and another 4 overs wouldn’t have made a difference. Maybe Australia were too tired to bowl,” he added.

Debutant KL Rahul was sent at number three ahead of Cheteshwar Pujara who was demoted to number six. This was another puzzling move after Rahul’s selection at number six ahead of Rohit Sharma and Suresh Raina.

“The reason behind promoting Rahul was that he is also an opener so we wanted him to bat up the order. Also we thought there may come a situation to see what could happen later on in the day and with the mini-collapse, Pujara is a better man to have at that point in time,” explained Dhoni.

“It also gave us a chance to test Rahul because he is a top-order batsman. He was batting really well in the nets so we thought he can do well at number five or six. The decision earlier was between him and Raina, but we thought he really looked good during practice sessions.

This series has seen a lot of banter in all the three Tests and perhaps the Melbourne Test was the most heated so far, particularly after how temperatures soared between Virat Kohli and Mitchell Johnson.

“I don’t really know a lot of what is spoken on the ground. The captain is in the dressing room while batsmen are batting or I am standing behind the wickets when bowlers say something to batsmen,” Dhoni said.

“It is said in heat of the moment and you cannot really control that. But as a captain I tell the umpires to let me know if something has happened and it will be dealt with appropriately. I have told my players not to abuse as that is definitely unacceptable.

“As long as it is left on the field, it is fine. After all you don’t want players to be just standing there and not speaking, and just playing cricket,” he said.

With Dhoni’s announcement though, none of this really matters. He goes out suddenly from the longest form of the game, without the chance of a farewell match as happens in Indian cricket.

As Australia regained the Border Gavaskar Trophy with a Test to play, this was the sixth consecutive Test series loss overseas for the team under his leadership.

“Even before going into the Test match we knew we can’t really win this series. So that’s something we had to come to terms with. We wanted to win this Test, and it was quite a well-placed game today.

“It was difficult for us to win by the time we started batting. But later we were definitely in a position from where we could have lost. After that, I felt we would accept draw as a fair result because we were in trouble and from there to draw is good enough. You don’t definitely want to lose a Test match,” Dhoni signed off, for the last time as Indian Test skipper. 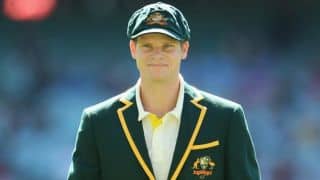 India vs Australia 3rd Test at MCG: Steven Smith disappointed for not winning