The Indian captain also hinted that he could bat at No 6 in the first Test against England.

India captain MS Dhoni has said that he is ready to bat at No 6 and thus dropped big hints that his side will look to go into the first Test against England with five bowling options in Nottingham on July 9, 2014.

“I have to be ready at number six because that’s a crucial phase of the game where you can turn the matches,” Dhoni said on the eve of the opening game of the five-match Test series.

“If you start getting a few boundaries and bat positively in the company of other batsmen, and that’s the time of the game you are able to get some quick runs because the ball will be slightly old and the bowlers are a bit tired. But you have to make sure that you get good start, and more importantly you capitalise on it.

“There are not too many teams around that have five bowlers. So, in itself it is a big challenge. It is great to have five bowlers outside the sub-continent and we will look at the wicket tomorrow and then decide,” he added.

It means that India could look to play Stuart Binny as an all-round option at No 7. Dhoni, though, turned diplomatic when Binny’s name was thrown at him directly.

Playing five bowlers will give India a chance to back up their three-seamers-one-spinner bowling attack that was found wanting in South Africa and New Zealand. The team was able to get into winning positions in Johannesburg and Auckland but unable to close out those games.

“Sometimes a little luck is also needed in cricket. We need to give credit to the opposition but overall I felt the bowling department did well,” Dhoni said.

When asked if Zaheer Khan‘s absence has compounded matters for the inexperienced bowling attack, the Indian captain replied, “The good thing is that we have got some time to adjust to the conditions here. We have done the fitness part in the last 10-12 days. Now we are going through a phase where we are easing the workload on the fast bowlers.”

“They have been bowling in the right areas, and making the batsmen play which is very crucial in this part. Overall they are looking good. Hopefully we don’t have too many injuries like it had happened in the last series (2011). I remember we had close to nine or 10 injuries to our top players.”

Dhoni also had a good word for Ishant Sharma, who may have looked good in patches during the two warm-games but needs to step up in place of Zaheer.

“As far as Ishant is concerned, he is bowling well. It’s very important to get into a good rhythm. So far he has been bowling well and he is also someone who can get a bit more bounce than some of our other bowlers,” he added.

Dhoni then spoke about the mentoring experience the Indian team shared with former cricketer Rahul Dravid.

“In South Africa, he was part of the commentary team and we noticed that the youngsters used to go to him and have a chat about cricket or life or whatever they felt like and then moved ahead and went for the net sessions. We noticed that.

“He has been with the team and he has shared his experiences. We want a mentor with the side, who can talk about his past experiences over here. It’s all about him interacting with the youngsters, and they are also a lot more comfortable in talking to him,” he revealed.

England have held a stranglehold over India in their last two Test encounters, winning 4-0 in 2011 here and then 2-1 in India in 2012-13. The visitors will now be looking to turn the tide and they have Sri Lanka to look up to after the islanders beat the Three Lions in their own den during the recently concluded Test series.

“Even the mightiest of the teams, West Indies, were really dominant at one stage, and once you dominate for such a long period, you won’t do well for some time. But England have some very good talent. So it’s just a matter of time before they come back to form,” Dhoni signed off with cautious words. 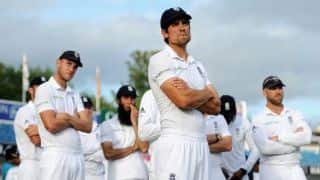