MS Dhoni: I don't mark the stumps that I collect

MS Dhoni: I don't mark the stumps that I collect

It would be of no surprise to anyone, if MS Dhoni adds more of the stumps to his collections during the ICC World T20 2016.

India‘s limited-overs skipper MS Dhoni ever since has a reputation to collect the stumps following team India’s victory in any match, and looking ahead into the deadly for possesed by India in the ongoing ICC World T20 2016, it would be of no surprise to anyone, if he adds more of the stumps to his collections. As India get set to play in the sixth edition of the tournament at home, the inaugural champions have managed to win 10 of their 11 Twenty20 International (T20I) matches they have played so far in 2016. India won 3-0 against Australia Down Under and also claimed the first ever Asia Cup T20 2016 this month, reports Reuters. MS Dhoni’s collar grabbed by Dwayne Bravo during India vs West Indies ICC World T20 2016 warm-up match

As India get set to carry forward the momentum in the mega event of the format, Dhoni is confident of being able to challenge the opponents in the home soil. Although the team would be under enormous pressure form the 1.2 billion cricket fans, but Dhoni knows how to remain cool in the situatrion, and that is why he has earned the tag of ‘Captain Cool’. Dhoni, who hit the winning six in the ICC Cricket World Cup 2011 final to lift the title would once again fancy his chances at the World T20 title, as he believes he has the ammunition to do it again. MS Dhoni, The Untold Story: New Poster, teaser release date revealed

Rohit Sharma, Shikhar Dhawan and Virat Kohli can single-handedly take the game away from the opposition, while the likes of Suresh Raina, Dhoni and Hardik Pandya could smash the ball all over the park to set a mammoth total or chase any total down. Although there were some issues with the team in the death bowling section, Dhoni more or less seems confident that they have sorted the issue out. MS Dhoni the Untold Story: First look of biopic revealed

Jasprit Bumrah, who can bowl brilliant yorkers, might not be a familiar face in the team, but his unorthodox action makes him a deadly bowler as batsmen find him difficult to read. “The good thing with Bumrah is he technically has bit of pace. He does not have a normal action, so batsman also takes time to get used to it. At the same time, his execution of yorkers is also very good,” said Dhoni.

Ravichandran Ashwin, who brilliant technique of spin along with the carrom ball delivery, has also troubledquite a few batsmen in the past, and would be a crucial bowler for India again this time. Mohammed Shami is the only thing to worry about owing to his fitness issues, but nothing serious other than that. “It would be great. I have to do my post-cricket plans you see. I don’t mark the stumps that I collect. [Post-retirement] I’d watch the matches, look at the stumps and say ‘ok, this is from that match’. I have enough to keep me occupied for years,” said Dhoni. 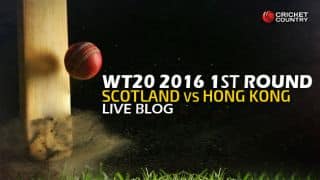