India’s One-Day International (ODI) captain Mahendra Singh Dhoni has said pacers Mohit Sharma and Dhawal Kulkarni still have a chance of being included in the ICC Cricket World Cup 2015 squad. Besides the 15 players picked for the World Cup, India have included Mohit Sharma and Kulkarni in the tri-series squad to give the main bowlers some time to recover from the Test series.

“That’s the major thinking behind them being here,” Dhoni said. “At the same time we will first select players from the 15-man World Cup squad. If we feel a player needs more time then we will look to add Mohit or Dhawal in the squad.”

Discussing the squad further, Dhoni said the inclusion of Stuart Binny was a crucial one as at some of the pace friendly venues the team will need a seam bowling all-rounder. “We are playing a few games in Perth and New Zealand, where we felt the last time that there wasn’t much purchase for the spinners,” Dhoni explained.

“That’s where Stuey may come in. Irrespective of all the debate, the best seam all-rounder in India has been picked. He is an exciting player – he bats aggressively and is a good bowler. If he gives me six to eight overs it’s more than enough.”

Dhoni said fielding will be his team’s strength going into the marquee tournament. 0″Fielding is something we pride ourselves on,” he said. “It is a major part of modern cricket irrespective of the format. We are a fantastic fielding side and it has reflected in the ODIs that we have played in the last few years. On grounds with big outfields it is important to judge where to stand because on these grounds the batsmen like to push the ball between two fielders and run two-three runs.”

India’s record in the ICC tournaments in the last four years has been remarkable. They won the Champions Trophy in England in 2013 and were runners-up in last the World Twenty20 in Sri Lanka. While Dhoni is quietly confident of his team’s ability to win big, he is not getting carried away.

“We have done well in the last two ICC tournaments and both of them were away, in Sri Lanka and England,” he said. “But the conditions in Australia and New Zealand are quite different. You also have to keep in mind the form of the players and the little niggles that some of them are carrying. But yes, we will take a lot of confidence out of our last few performances in the ICC tournaments.” 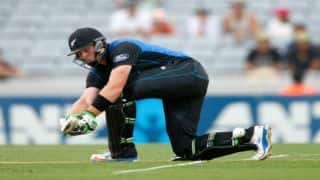