MS Dhoni indicated playing Big Bash League (BBL) after retirement as heaped praises about the Australian domestic tournaments as Dhoni went on to say that the quality of Australian domestic circuit is very high and that makes Australian cricket to be “blessed.” The Indian limited overs skipper added, “Australian first-class cricket, the quality is very high which means the players who come up through the ranks of first-class cricket already have good exposure of playing against cricketers who have played international cricket or who are playing international cricket.” Dhoni and his side are in Australia playing the five-match One-Day International (ODI) series against the hosts with the opening match being played at Perth on Tuesday. LIVE  CRICKET SCORECARD: India vs Australia, 1st ODI 2015-16, at WACA, Perth

According to cricket.com.au, Dhoni wasn’t ready to give out any information about his retirement from international cricket when he suggested that all he is doing right now is focussing on the ODI and Twenty20 International (T20I) series against Australia.

He added, “We are quite focused on international cricket for now so I can’t really make any comment on that [BBL future]. We’ll see how the future goes. It depends on when I retire and whether I’m in a position to play international cricket. The Big Bash, the quality of cricket is high so a lot depends on the physical fitness and the will to carry on and play more cricket.”

“Because if you’re part of the Indian cricket team and you play for 10 to 15 years, at times you feel you’ve played too much cricket. So we’ll have to wait and watch and it depends on my retirement, whenever that comes,” Dhoni said. Live Cricket Score, India vs Australia 2015-16, 1st ODI at Perth

India is the only major cricketing nation to have not had one if its players take part in the KFC Big Bash League, which this season features greats like Jacques Kallis, Kumar Sangakkara and Mahela Jayawardene, who have all retired from international cricket but continue to star in T20 competitions around the world. 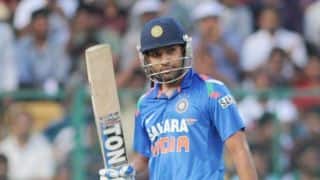 Rohit Sharma registers highest score for an Indian at WACA, Perth, during 1st ODI vs Australia