Former England cricketer Bob Willis says Dhoni is also one of the best finishers in the world.

Former England player Bob Willis said that MS Dhoni is the best One-Day International (ODI) captain and also the best finisher in the format since Michael Bevan. Willis praised the Indian skipper in his column while previewing the India-West Indies ODI series.

In his column for SkySports, Willis, “You have the extraordinary character that is MS Dhoni, who, for my mind, is unequalled when it comes to ODI captaincy. He may look a little laid-back when it comes to captaining in Test cricket – a format India seem to have a death wish in away from home when you look at their lack of fight – but as a captain and wicketkeeper-batsman in ODIs he is staggering,” Willis said.

“He is magnificent when it comes to deciding what a batting order should be when you are chasing a target – he is quite happy to promote himself to six or demote himself to eight. Dhoni never gets fazed, seems to have complete control of team affairs, taking precedence over any coach or outside influences and what he says invariably goes. When the fire is at its hottest, he delivers – and that goes for his batting, too,” added Willis.

Dhoni has a formidable record in the 50-over format. He averages 53.11 in 247 matches as of October 7, 2014. While Dhoni’s batting in overseas Tests has been a concern, in ODIs he has been as effective as at home averaging 48.34. While the numbers maybe high, it doesn’t give an indication of the numerous matches he has won for India while batting in the death.

“Australia’s Michael Bevan was a remarkable ODI finisher back in the 1990s and early 2000s, but in the modern game if you wanted someone to bat for their life trying to chase nine to 11 runs an over for seven or eight overs, you’d go for Dhoni every time – and back him to succeed every time,” Willis said praising Dhoni as the finisher.

“Dhoni is helped out by a powerhouse middle order, including Suresh Raina, who has been in imperious form in the Champions League T20 with Chennai, but Virat Kohli will want to impress. He was spectacularly bad in England but you don’t get his stats in the one-day game by accident and you’d imagine he will come good sooner rather than later, which could spell disaster for the West Indies” Willis concluded. 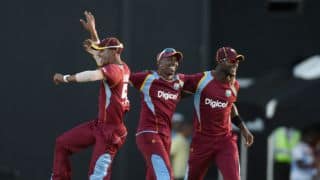