Rohit has so far scored 159 runs in six group league matches at a mediocre average of 31.8.

Melbourne: Indian captain Mahendra Singh Dhoni is not too much worried about Rohit Sharma‘s struggling form in the ongoing cricket World Cup and said that the important thing was to see the manner of his batting rather than the number of runs he has scored. Rohit has so far scored 159 runs in six group league matches at a mediocre average of 31.8 with two half-centuries to his credit. MS Dhoni finishes ODI chase with yet another six for record 9th time!

The only cricketer in the world to score two double centuries in ODIs, Rohit has got good starts in most games but has been able to convert them into 50-plus scores in only two matches — against UAE (57 not out) and Ireland (64). Dhoni would not, however, read too much on Rohit’s dip in form. Rather, he has all positive words for his teammate. MS Dhoni, Suresh Raina, Virat Kohli have been masters in run-chases for India

“Well, we have to consider the fact there have been instances where we have chased quite a few times so far in the tournament, and if the opposition (UAE, West Indies) have not scored too many runs, the openers, they can’t score the same number of runs,” he said in Rohit’s defence. India vs Zimbabwe, ICC Cricket World Cup 2015 Pool A Match 39: Highlights

Dhoni then explained as to why it’s important to take note of the manner in which someone is batting rather than the volume of runs accumulated. “What is important is to see what kind of a start they have got. I feel Rohit has batted really well so far. He looks quite calm and composed, and at the same time he’s playing the shots really well. That’s something of a key factor,” said the captain.  India have scripted their preparations for the knock-outs of ICC Cricket World Cup 2015 perfectly

“It’s not always about the runs. We have seen batsmen who are playing really well but they have not scored runs (in matches), and all of a sudden you see a game where they score really big and they come back. So it’s not really being out of form. What’s important is to spend time in the middle, and I think Rohit has done enough of that,” he said.

Ravindra Jadeja’s form with the bat has been a worry but after getting hammered by Brendan Taylor and company, ending with figures of none for 71 against Zimbabwe, his bowling has also come under scanner.

Dhoni said Jadeja’s batting form was a cause of concern but at the same time had his defence for the Saurashtra lad ready. “Well, I think to some extent you may say it’s a bit of a concern, but at the same time, as I said, if you are worried about Raina in the sense, he has not got enough chance to bat, but he has still done decently well. It’s difficult to go down further because then you come to me and say, okay, maybe you have batted a bit. But Jadeja has not got too many much chances with the bat. Also it’s not easy to get in and slog over here,” Dhoni said, in defence of Jadeja’s poor batting.

The skipper, however, admitted that Jadeja has blown hot and cold in his bowling. “Only the bowling, I think, has bowled decently well in patches. He’s still improving, and overall, he’s a key ingredient. The reason being it gives us that hope, and we have put in a lot of effort and time in him since the last World Cup. Jadeja has been a regular part of the team, and he has actually done really well for us. I’m quite happy with the way he’s bowling,” Dhoni said.

Dhoni reasoned Jadeja’s poor figures against Zimbabwe to the short boundaries of the Eden Park . “I won’t really consider that game because both Ashwin and him [Jadeja], they went for shorter boundaries and it was difficult, and the way Taylor was batting, he took them on,” said Dhoni. 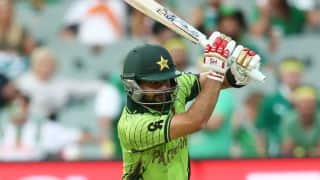