In his trip to the Maldives, the 38-year-old and his wife Sakshi is in the company of former India cricketer Rudra Pratap Singh and his wife. Former India skipper MS Dhoni makes news with all his actions – be it on-the-field or off it. He is loved by his fans and a video that surfaced during his family trip in Madhya Pradesh recently where he was mobbed by fans is a testament of that.

He is currently on a vacation in the picturesque Maldives, where he was spotted playing volleyball with friends. The video was shared on a fan page and has ever since gone viral.

Here is the video where you can see Dhoni playing volleyball in a casual black vest and shorts:

In his trip to the Maldives, the 38-year-old and his wife Sakshi is in the company of former India cricketer Rudra Pratap Singh and his wife.

Earlier, Dhoni was spotted driving a speedboat in the Maldives under the supervision of the captain of the ship. Surely Dhoni is making the most of his downtime away from cricket.

The two-time World Cup-winning captain has not played international cricket since India’s heartbreaking loss against the Kiwis in the 2019 ICC Cricket World Cup. 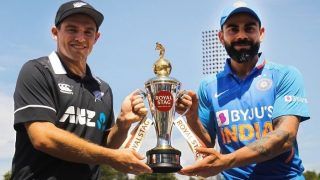