India’s limited-over skipper MS Dhoni recently posted a photo with his team’s support staff in their tour of Zimbabwe. India, who won the three match ODI series 3-0, have three T20Is left in their tour. Dhoni and his team demolished the hosts in the ODI’s. The first match saw them bowling out Zimbabwe for 168, before easily chasing it down thanks to an unbeaten century on debut from KL Rahul. In the second ODI, the hosts were bowled out for a mere 126, as India chased down the target with eight overs to spare. The final match had a similar story, with Zimbabwe getting bowled out for 123, with India chasing down the target with ease. FULL CRICKET SCORECARD: India vs Zimbabwe, 1st T20I Match

With all the support staff of the team to Zimbabwe

The three T20Is between Zimbabwe and India will kick off on June 17, with all the games played at Harare. India are currently second in the T20I rankings, with their opponents ranked 12th. India have a very young and inexperienced side in this tour. Barring MS Dhoni, no other player had played more than 40 ODIs.

The ODI series saw India give debuts to the likes of KL Rahul, Karun Nair, Yuzvendra Chahal and Faiz Fazal. Rahul finished as the highest run-scorer in the series with 196 runs. Jasprit Bumrah ended up as the highest wicket-taker with nine wickets.

The last time India toured Zimbabwe in 2015, they won the ODI series 3-0 under Ajinkya Rahane’s captaincy. The hosts though fought back in the T20Is, which ended 1-1. 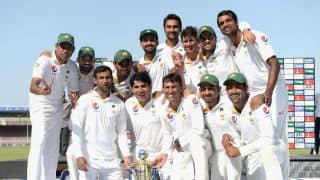