Chennai: Praising the fielding efforts of his side Chennai Super Kings (CSK), skipper Mahendra Singh Dhoni said they were “outstanding” on the field in the thriling two-run win over Kolkata Knight Riders (KKR) in an Indian Premier League (IPL) 2015 match at the MA Chidambaram Stadium on Tuesday. READ: Kolkata Knight Riders choke against Chennai Super Kings, fail to chase 135

Chasing CSK’s 134 for six, KKR fell short by two runs owing to some wonderful bowling backed up by stupendous fielding from the opponents, especially the likes of Brendon McCullum and Dwayne Bravo who dived all around the park saving crucial runs. IPL 2015 Points Table & Team Standings

“We did drop two catches, but the fielding was outstanding. Russell’s run out was important for us. Brendon McCullum was lightning on the field. And in the middle overs, we did put pressure on them, so they couldn’t rotate freely,” Dhoni said at the post-match presentation ceremony. IPL 2015 Highest run-scorer: List of best batsmen in IPL 8

Asked about the wicket he said: “This was the wicket where you don’t know what is a good score. It’s where if you bat well you can score 160 and if you bowl well you can defend 125. That’s what I told the team.” IPL 2015 Highest wicket-taker: List of best bowlers in IPL 8

Dhoni also said both spinners Suresh Raina and Ravindra Jadeja did a commendable job to keep the KKR batsmen at bay as their six overs produced just 23 runs. “(Suresh)Raina has done well with the ball for us sometimes. He hits the seam and his trajectory is low and he can get wickets if batsmen make mistakes. I wanted to save one over of (Ravindra) Jadeja for the end, if the fast bowlers didn’t bowl well, his three overs were important,” he said. IPL 2015 schedule: IPL 8 match time table with venue details 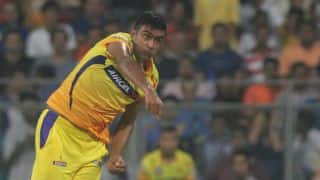