India captain Mahendra Singh Dhoni today hailed his bowling and fielding department for notching up the face-saving 10-run win against Pakistan in the low-scoring third and final ODI of the series here. India captain Mahendra Singh Dhoni today hailed his bowling and fielding department for notching up the face-saving 10-run win against Pakistan in the low-scoring third and final ODI of the series here.

Coming into the match with the three-match series already out of their grasp after losing in the first two ODIs, India struggled to 167 all out before producing a spirited bowling and fielding display to restrict Pakistan to 157.

“We didn’t start well. 160 wasn’t enough but I told the team that yes it is not enough, but the team should compete well.

“There was something for the fast bowlers in this wicket but the important contribution was from the spinners. The spinners did a great job but for me the men-of-the-match were the fielders in this game,” Dhoni said at the post-match press conference.

“Bhuvi (Bhuvneshwar Kumar) started well, then Ishant bowled well with a not-so-new ball. (Ravindra) Jadeja and (Ravichandran) Ashwin supported each other well too,” he added.

The India skipper said that the only positive to come out of the series against Pakistan was the hosts’ bowling effort.

“It is important to learn from each and every game and this is a young side and there is learning for everyone.

Bowling line-up was a big positive in this series. Yes, there was help for bowlers, but we bowled well as a unit,” said Dhoni, who was adjudged the man-of-the-match for his 55-ball 36 and leadership qualities in today’s game.

Pakistan captain Misbah-ul-Haq agreed with his Indian counterpart and said India’s bowling and fielding made all the difference in today’s low-scoring thriller.

“Full marks to the Indians. They bowled very well and their fielding was outstanding. We tried to see off the new ball, but the ball was doing things even after that. It was difficult to score runs,” he said.

Misbah lauded the entire team, especially his bowling attack for helping the side win the three-match series 2-1.

“There were plenty of positives from this series, especially the fast bowlers and Nasir Jamshed. It was a great series, tightly contested and today we had another tight game,” he viewed.

Even though man-of-the-series Nasir Jamshed, who scored back-to-back centuries in the first two ODIs in Chennai and Kolkata, was pleased with his performance, he was disappointed to return home on a losing note.

“I started well today, but unfortunately didn’t last till the end. The pitch was difficult to score in the second innings. Thanks to the crowd, it has been great all this series,” he said. 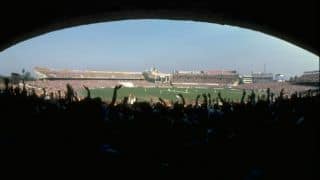