Cricketers’ love for motor vehicles is no news. While India‘s Test skipper Virat Kohli is prompt to become the first one to own the fastest Audi as soon as it is launched on road in the country, team’s limited-overs skipper MS Dhoni‘s love for motorbikes is a well known fact. As Team India tours Zimbabwe, MS Dhoni was seen riding a police bike. Dhoni himself uploaded the picture on his Instagram account. The skipper has already led the young side to win the three-match One-Day International (ODI) with one match remaining and was seen in a happy mood. READ: MS Dhoni’s wicketkeeping gloves, pads fetch Rs. 2.5 lakhs in charity

MS Dhoni apparently has more than 20 bikes in his collection which includes Confederate Hellcat X132, Ducati 1098, Kawasaki Ninja ZX14R, Harley Davidson Fatboy, and Yamaha YZF600 Thundercat and many other bikes to brag about. The cricketer is very fond of his machines and keeps on posting pictures of bikes from his collection.

Earlier, Sakshi Dhoni was also seen flaunting her husband’s collection as she posted a number of photos as the bikes were being cleaned. The cricketer is known to take early morning rides on his favorite bikes around the city and was earlier requested to inform the police about his plan for security purpose. Here is the latest Instagram post where MS Dhoni is seen riding a police bike in Zimbabwe:

Team India will play the final ODI on Wednesday and Dhoni’s boys will definitely aim a whitewash. The series will be followed by a three-match T20I series. 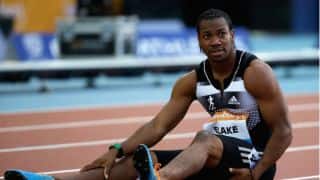