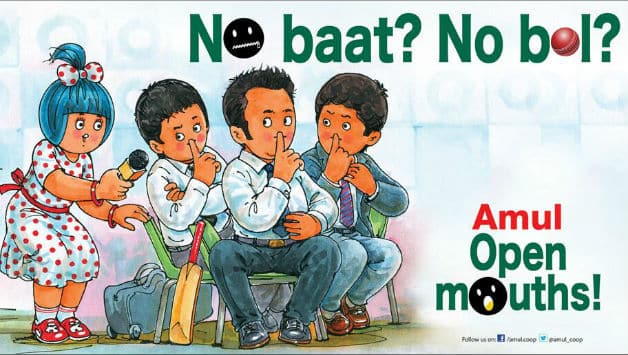 Dhoni evaded questions on the IPL spot-fixing saga and merely smiled when two journalists quizzed him on the fixing row, while the media manager turned down the questions.

The ad, titled “No baat? No bol?” shows Dhoni and his Indian teammates refusing to speak when quizzed by the Amul girl.

Despite encountering political pressure on several occasions, daCunha’s agency has made it a policy of not backing down.

The Amul girl was created as a mascot as a rival to the Polson butter girl.”Eustace Fernandez (the art director) and I decided that we needed a girl who would worm her way into a housewife’s heart. And who better than a little girl?” says Sylvester daCunha. And so it came about that the famous Amul Moppet was born.