The Delhi Police on Saturday told a court in Delhi that the photo of cricketer Mahendra Singh Dhoni in a magazine posing as Lord Vishnu and holding a shoe in his hand "is a work of art" and the player had "no intention" to insult the Hindu religion. 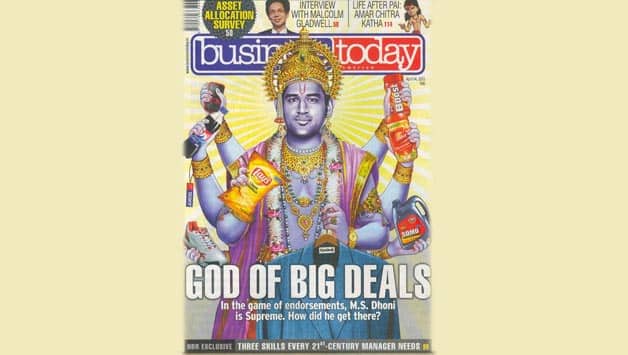 MS Dhoni shown as Lord Vishnu on the cover of a magazine.

The Delhi Police on Saturday told a court in Delhi that the photo of cricketer Mahendra Singh Dhoni in a magazine posing as Lord Vishnu and holding a shoe in his hand “is a work of art” and the player had “no intention” to insult the Hindu religion.

Police had filed their status report in pursuance to the court’s order on a complaint seeking registration of an FIR against Dhoni, publisher and editor of a magazine for allegedly insulting Hindu religion and its gods and goddesses.

“In this regard, it is submitted that the photograph of Mahendra Singh Dhoni published in the said magazine may not be a deliberate or intentional act of him.

“The photograph of Dhoni published in the magazine is a work of art and animation done by the artist/publisher of the said magazine,” the report filed by officials of Nand Nagri Police Station said.

The report was filed before Metropolitan Magistrate Mayuri Singh who fixed the matter for September 9 for hearing arguments on the registration of FIR.

The police also said the magazine has its publication from Film City in Noida which forms the jurisdiction of district Gautam Buddha Nagar in Uttar Pradesh in the matter.

“It is also to be mentioned here that no other such complaint apart from this present complaint has been received at Police Station Nand Nagri in this regard,” the report said.

The court was hearing a complaint filed by Rajinder Singh Raja, national general secretary of a social organisation Shivsena Hindustan, alleging that in the April 2013 edition of the magazine, Dhoni was portrayed as Lord Vishnu with a sub-title ‘God of Big Deals’ and holding products of several firms including a shoe in his hand.

The complaint sought lodging of an FIR for the alleged offences of injuring or defiling place of worship, with intent to insult the religion of any class and uttering words with the deliberate intent to wound religious feelings.

The complainant had said Dhoni’s photograph has hurt his as well as the sentiments of thousands of Hindus and it had insulted the Hindu religion and Lord Vishnu.

“Dhoni has been portrayed as Lord Vishnu and instead of showing religious things, the magazine is showing several products of various companies including a shoe in his hand. It has insulted the religious sentiments and God,” the complaint had alleged.

It had said the act of Dhoni and the magazine is illegal and the cricketer has done this for the sake of money and publicity.

The complainant had said he has approached the court after the police did not take action on his complaint filed against the cricketer and the magazine editor.

The magistrate had earlier issued bailable warrant of Rs 5,000 against a sub inspector for his failure to comply with the court’s earlier order directing him to file a status report in the complaint.

IPL 2013 spot-fixing: Dawood Ibrahim could be named in charge sheet