Mahendra Singh Dhoni's century went in vain as James Faulkner and Adam Voges performed a heroic act to take Australia to an unlikely win over India in the third One-Day International (ODI) of the seven-match series at the Punjab Cricket Association (PCA) Stadium in Mohali on Saturday. With the victory, Australia lead the series 2-1. 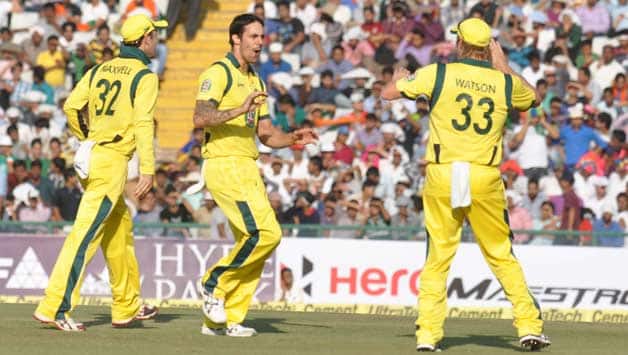 Mahendra Singh Dhoni‘s century went in vain as James Faulkner and Adam Voges performed a heroic act to take Australia to an unlikely win over India in the third One-Day International (ODI) of the seven-match series at the Punjab Cricket Association (PCA) Stadium in Mohali on Saturday. With the victory, Australia lead the series 2-1.

Needing 304 runs to win, Australia started off well as openers Aaron Finch and Phil Hughes put on 65 runs in the first 10 overs. However, Indian bowlers pulled things back in the next ten overs as they bagged three wickets and gave away just 26 runs in that space.

Skipper George Bailey put on a 83-run partnership with Adam Voges for the fourth wicket to revive Australia’s chances. However, two quick wickets put the visitors on the backfoot and crushed all hopes of a victory.

First, Bailey was dismissed leg-before while trying to pull a short-pitched delivery by Vinay Kumar. In the last ball of the same over, a miscommunication between Voges and Glenn Maxwell resulted in the latter finding himself out of the crease as Shikhar Dhawan managed to hit the stumps with a direct hit.

With the run-rate climbing steeply, the target only became tougher even as dew set in.

James Faulkner and Voges were at their brutal best in their half-century stand. The match turned on its head in the 48th over when they struck 30 runs off Ishant Sharma’s over. The batsman took full advange of his poor bowling which was all over the place, especially with the lenght.

Faulkner struck six sixes and three boundaries to take his team to victory.

Earlier in the day, Dhoni battled cramps and hamstring problems to score a well-costructed century. His century and Virat Kohli‘s half-century helped India reach 303 for nine in 50 overs.

Dhoni’s 121-ball 139 included 12 boundaries and five shots outside the park.

After winning the toss, Bailey elected to field first. With due expected to be heavy towards the latter part of the day and the brutal onslaught of the Indian batsmen in the previous encounter, it was a decision on expected lines. The green cover on the pitch would’ve also tempted the Australian skipper to unleash his pacers after a demoralising outing at Jaipur.

The pitch curator Daljit Singh had said before the start of the match that the wicket was good enough for a high-scoring encounter, but it won’t be like the one at the Sawai Mansingh Stadium , where the batsman scored a ‘vulgar’ amount of runs. The pitch had enough for the bowlers, he reckoned.

Bailey would’ve been pleased to see his move work as both the openers fell early. Suresh Raina and Kohli combined to put on a stable partnership, before the former was undone by short-pitched bowling.

Johnson, who opened the bowling for Australia, was brought back into the attack in the 11th over to trouble the left-hander. After being unsuccessful in the first over of his return spell, he finally found success in the 13th over when Raina couldnn’t sway away from a delivery targeted just outside his off-side.

The local boy Yuvraj Singh’s stay at the crease wasn’t too long either. He was dismissed for a first ball duck trying to poke at a delivery outside off-stump. It was his second Golden Duck at Mohali after the 2011 World Cup semi-final match against Pakistan where he was bowled by Wahab Riaz. By then, India were reduced to 76 for four.

Nonetheless, Kohli looked in good touch and hit crisp shots. Without taking any risks, he scored at about run-a-ball. In company of Dhoni, he consolidated the Indian innings.

Dhoni started off the innings slowly. After suffering a hamstring injury early in his innings, Dhoni had trouble while running. However, as the match progressed, the pace of his running as well as his innings increased.

Just when they looked well set to go on the attack, Kohli was dismissed trying to cut Glenn Maxwell by edging the delivery to the wicketkeeper. Ravindra Jadeja, who was presented with a fine opportunity to showcase his ability as a batsman failed yet again as he became the fourth player in the Indian innings to get dismissed boff a short-pitched delivery.

It was in the company of Ravichandran Ashwin, that Dhoni unleashed his attacking instincts. The duo added 76 runs off 67 deliveries for the seventh wicket partnership. In the 37th over, Dhoni brought up his 49th ODI half-century off 77 balls.

However, it was after that, he took the attack to the opposition. His next 50 runs took just 30 balls. To add to Australia’s misery, skipper Bailey dropped him in the 49th over. Dhoni took no time to take advantage of that as he hit a boundary off the very next ball and a huge six three balls later.

For Australia, Johnson was the pick of the bowlers picking up four wickets for 46 runs off his 10 overs.

As much as the match was excellent for the Indian skipper, Umpire Shamshuddin would like to forget the events of his debut ODI match as an official. There were quite a few nervous decisions and backtracking.

First, he refused to give Dhawan out, but when the batsman decided to walk, the umpire raised his finger. It was followed by two more horrendous decisions in the Australian innings where he refused to give Phil Hughes out LBW and Finch out for edging a delivery to Kohli at point. The last event even got the Delhi player angry as he spoke the choicest of explicits to express his frustration at the batsman’s refusal to walk.

However, the most shocking decision was when he signalled a wide and then took his decision back.

The match was a showcase as to why ODI cricket is still alive. The last two matches in the series have provided for great entertainment to the crowd.