MS Dhoni says he gets influenced under pressure

MS Dhoni says he gets influenced under pressure

Indian skipper Mahendra Singh Dhoni on Tuesday said he had never planned to promote himself up the order during the finals of the cricket World Cup against Sri Lanka rather it was coach Gary Kirsten who came up with that instant idea. 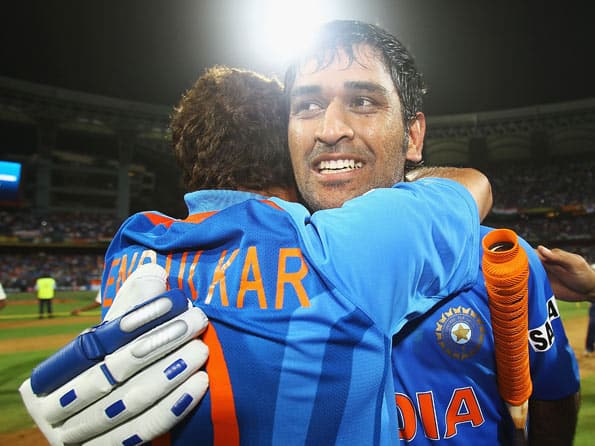 Indian skipper Mahendra Singh Dhoni on Tuesday said he had never planned to promote himself up the order during the finals of the cricket World Cup against Sri Lanka rather it was coach Gary Kirsten who came up with that instant idea.

Dhoni scored an unbeaten 91 and also had hit a six to clinch the coveted title for India during the finals against Sri Lanka in April this year.

“I hadn’t planned to promote myself and play earlier. Gary (then coach Kirsten) asked me if I would go early. I thought with two spinners, maybe I should. It worked for me,” said Dhoni at the NDTV Indian Of The Year Awards 2011, where the Indian cricket team won the award for India’s Heroes of the Year for the World Cup magic and history.

Dhoni said he promoted himself ahead of in-form Yuvraj Singh as he felt he would be able to tackle the spinners better, especially Muttiah Muralitharan, with whom he played in the IPL as a part of Chennai Super Kings.

“Gautam (Gambhir)and I do cheeky singles very well. Yuvi and I run the doubles very well,” he said.

Asked how he keeps his cool in pressure situations, the 30-year-old Dhoni quipped: “I get influenced by pressure but I have so much gray hair because I don’t let expressions on field reveal this.”

All his collegues also had many good things to share about their captain.

S Sreesanth, who was picked in the finals, ahead of R Ashwin after Ashish Nehra got injured, said: “He’s (Dhoni) like a brother.”

“He pushed me down in the order,” joked Yuvraj.

Asked about his captain, Virat Kohli said: “He backs his players all the time.”

Sehwag reiterated Kohli’s sentiments, while Gautam Gambhir called Dhoni “Very relaxed”. Ashwin too joined the chorus and said his skipper is always aware of the situation.

Gambhir, who cracked a brilliant 97 under pressure to contribute to the win, said he would regret his innings all is life.

“As soon as I got out, I thought I will regret these three runs for rest of my life (got out at 97). But being part of winning side makes up for everything,” he said.

Sunil Gavaskar, who was also present on the occasion, joked that the 1983 World Cup winning team was better looking.

Yuvraj Singh too joined in saying: “He’s right, we are an ugly group of guys.”

Rahul Dravid was conferred the lifetime achievement award for his contribution to Indian cricket. (PTI)