In the throwback video, MS Dhoni can be seen teasing wife Sakshi for failing to deliver the dialogue despite reading it from a piece of paper. Currently enjoying some time away from the rigours of international cricket, MS Dhoni shared a throwback video of wife Sakshi on his official Instagram account on Monday. In the 51-second long video, Sakshi can be seen struggling to deliver dialogue as the lovely couple spend some time together during a promotional ad shoot.

While sharing the video on his social media handles, the former India captain made fun of her better half’s dialogue delivery and subtly roasted her for failing to read it despite reading it from the piece of paper. “Blast from the past. When you turn the table and ask the director to deliver the dialogue especially when she keeps saying such an easy dialogue you should do it in one take. Time flies this was more than an Year back,” the 38-year-old Dhoni captioned the video, which went viral soon after being posted.

Blast from the past.when u turn the table and ask the director to deliver the dialogue specially when she keeps saying such an easy dialogue u shd do it in one take.time flies this was more than an Year back.

In the short clip, Dhoni can also be heard saying, “Dekh ke padh nahi paa rahi ho, tum deliver kaise karogi (You can’t read from a piece of paper, how will you deliver it)”.

Most of the Indian cricketers or sportspersons frequently post about their personal and professional life across various social media platforms. Dhoni has been on a sabbatical since India’s semi-final exit from the World Cup in England in July and also missed the West Indies tour and home series against South Africa and Bangladesh.

The former India skipper had earlier decided to take a two-month break and serve his army regiment after a gruelling India Premier League season and the ICC Cricket World Cup 2019.

Post the service of the nation, the veteran keeper has been involved in his commercial commitments in the recent few weeks and has been travelling to various parts of the country for ad shoots.

At a time when a lot is being talked about Dhoni’s future, India head coach Ravi Shastri had has thrown his weight behind the former skipper. He said rather than speculating, one should wait for Dhoni till the Indian Premier League (IPL) in 2020. 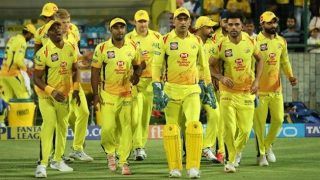 IPL 2020 Auction: Five Players CSK Should Buy At The Auction