“He (Dhoni) should give up the Twenty20 format. He should be rested from the format as a captain. He should remain part of the cricket but as a captain of the ODI and Test formats.

He is your Captain Cool and needs some time,” said Abbas.

Dhoni’s leadership has come under scanner after India slumped to yet another series defeat with a pathetic display against Pakistan following their first Test series loss to England at home in 28 years.

Pakistan spanked the hosts by 85 runs in the second cricket one-dayer in Kolkata to take an unassailable 2-0 lead in the three-match series.

Asked about the reason behind Pakistan’s dominance in the ongoing series, Abbas felt that the Indian batting and bowling line-up did not seem to be the same as it used to be earlier.

“The reason which I see is that the Indian batting and bowling line-up is not the same as it used to be earlier. We have always seen that the Indian batting has won you the matches but they can’t do anything if your bowlers don’t perform to the required level,” said Abbas on the sidelines of the CEAT cricket awards here last night.

Abbas said the hosts looked jaded after playing too much cricket in the past few months.

“The Indian team is playing a lot of ODIs and Tests these days that your players look very tired. They don’t have any problem as such, it’s just they need some rest.

“If you give them some rest in the days to come, you will see them performing excellently again. Winning and losing is part of the game,” said Abbas, who scored 5082 runs in 78 Tests and 2572 runs in 62 ODIs and remained one of the most successful Pakistani batsmen against India.

Dhoni blamed another disappointing batting performance for the loss against Pakistan at Eden Gardens and put the onus on the seniors who failed to soak in the pressure and consolidate the innings.

Abbas said when a captain starts finding faults in the team, it shows he is not happy with the performance of the players.

“You have to say something when faced with such kind of questions. If you keep on losing matches, captain will definitely speak his mind.

“He has always remained a cool captain but as one can see that prior to this tour, such kind of talks (where he was complaining about the seniors and the top-order batsmen) were playing on his mind. Look, if your captain cool is talking about these things, then he is not happy with the performance,” he said.

Asked whether the retirement of senior players like Sourav Ganguly, VVS Laxman, Rahul Dravid and Sachin Tendulkar has led to the sudden downfall of the world champions, Abbas said, “When great players go, you sometimes find it difficult to fill the gap.”

“You cannot find an immediate replacement for such greats. Sometimes it takes decades to find a suitable replacement. But I have full faith that the Indian batting line-up will keep on improving on a regular basis.”

Abbas felt that it would take decades for the Indian team management to find a replacement for the batting legend Sachin Tendulkar.

“It’s a big loss. The enormity of this loss is such that you can only be able to fill the gap in decades to come.”

Abbas, who was awarded with the CEAT Lifetime Achievement award for his outstanding contribution to cricket, felt honoured and privileged at receiving the recognition.

“It’s an honour. A player always feels special when he gets a lifetime achievement award. I am happy that I received such a big award. I hope that the Indian team also visits Pakistan for a series so that the bilateral cricketing ties between the two nations can improve.

“We also want to honour the past and present Indian players with such awards in Pakistan also,” he said. 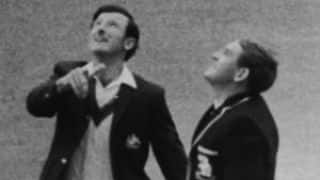