Parthiv Patel last kept wickets outside India in 2004 and thus was a surprise selection as the second choice keeper behind Wriddhiman Saha.

Wicketkeeping remains an area of concern as India head to the third Test of the Freedom series against South Africa, already having lost it 0-2. Wriddhiman Saha was exceptional behind the stumps in the first Test, notching up 10 catches. Saha’s injury meant Parthiv Patel’s inclusion at Centurion. India’s fortunes further slumped. Not only Parthiv was disappointing with the bat but also dropped catches and did not attempt a few. Had it not been for Parthiv’s buttery fingers, India could have restricted South Africa to a lower total. Taking the current scenario into consideration Sunil Gavaskar reckoned that MS Dhoni should not have quit Tests.

“If Dhoni wanted to carry on, he could have carried on. Clearly, I think he might have had too much of captaincy [burden]. I would have actually liked him to maybe give up captaincy and still stay in the team as wicketkeeper-batsman because his advice in the dressing room would have been invaluable. Maybe he thought that the best course for him was to not to be there,” Gavaskar, a member of the commentary team, told during the Test.

Parthiv had made a comeback to the Indian side in 2016-17 after a gap of eight years. He last kept wickets outside India in 2004 and thus was a surprise selection as the second choice keeper behind Saha. The hamstring niggle to Saha rules him out of the Test series and Dinesh Karthik has been drafted in as the replacement.

“Wriddhiman Saha has been missed. There is no question about it. His keeping is at an altogether different level,” Gavaskar said. “Parthiv Patel though is a competitive wicketkeeper. He is a little fighter as we can see when he gets the bat in his hand. However, sometimes with the gloves, he can have a little bit of an issue. We saw with that missed opportunity [Elgar on Day 3]. If we had gone for it and dropped it, then there would have been no issues. But not going for a catch does make you feel a little bit disappointed.” 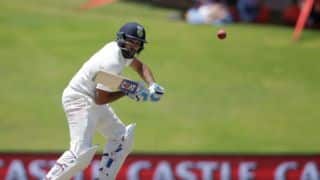