Former Indian captain MS Dhoni spoke at a ceremony to mark the silver jubilee of the Thiruvallur District Cricket Association.

Former Indian captain MS Dhoni has achieved numerous accolades in his playing career. He won almost every ICC trophy in international cricket before retirement and believes that the foundation for all the trophies was laid when he played in district cricket.

Dhoni was speaking at a ceremony to mark the silver jubilee of the Thiruvallur District Cricket Association. He stressed that one has to work hard and form himself while playing for his district or school. He was part of the event as the chief guest alongside former ICC Chairman and former BCCI president N Srinivasan. The Chennai Super Kings star also lauded Thiruvallar District Cricket Association for completing 25 years.

“And, I always felt for me grassroots cricket was school-level cricket, because it is a place where you want students to play all the different sports, but at the same time the responsibility comes to the district cricket association to organise a cricket tournament where all the schools of the district, they make sure that it is prestigious enough to compete,” concluded Dhoni. 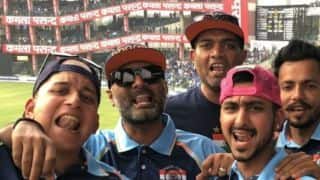