MS Dhoni: The Untold Story was released on 4,500 screens and the result was quite expected one as it got an excellent opening on first day of movie from Box office.

The most awaited biopic of the year MS Dhoni: The Untold Story, which is based on India s most successful captain MS Dhoni, has created huge amount of buzz among the fans which can be easily understood through social media. The movie got released on September 30, which also marks the 9th anniversary of his One-Day International (ODI) captaincy, which began back in 2007. It was released on 4,500 screens and the result was quite expected one as it got an excellent opening on first day of movie from Box office. The movie had already earned lot of money through satellite rights, theatrical rights, etc.

On the first day of the movie, according to renowned Bollywood critic and business analyst Taran Adarsh, it has got the best opening in biopic genre with INR 21.30 crore. Also, the movie has got second best opening of the year after Sultan , which earned INR 36.54 crore on first day of the movie. There is huge amount of collection is expected on Saturday and Sunday. Most of the first day show tickets were sold and as a result of which, most of theatres had full house, which was again very much expected and it will surely continue to improve in the weekends too.

#MSDhoniTheUntoldStory is the BIGGEST OPENER in the biopic genre… Sat and Sun biz should add to a FABULOUS total. India biz.

The movie is mostly about Dhoni s rise and journey to become international cricketer from the lowest ranks. Dhoni hails from the capital city of Jharkhand state Ranchi and him becoming a cricketer has motivated a lot of youngsters of his city. Jason Holder: West Indies give equal priority to all formats 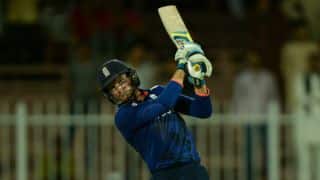