MS Dhoni's biopic poster was unveiled on the occasion of his 35th birthday on July 7.

India’s limited-over skipper MS Dhoni’s biopic has created a rife in social media. Finally, the much anticipated trailer of ‘MS Dhoni: The Untold Story’ released on August 11. Dhoni has been one of the most followed sportsperson and it is not wrong to assume he has an unbelievable fan following across the globe. Fox Star Hindi found the perfect day to unveil the poster of the biopic on July 7 – Dhoni’s 35th birthday. Dhoni along with reel life ‘Dhoni’ Sushant Singh Rajput and direct Neeraj Pandey showcased the trailer of the biopic at in a University, earlier in the day. ALSO READ: ‘MS Dhoni: The Untold Story’ poster unveiled

A story that you simply cannot miss. Here’s the official poster of M.S. Dhoni : The Untold Story! #HappyBirthdayMahi pic.twitter.com/giRaOdFRSC

The star cast has Kiara Advani, Herry Tangri, Anupam Kher, Bhoomika Chawla and Disha Patani apart from Sushant. While Kiara will be seen as Sakshi Dhoni, Herry Tangri will play Yuvraj Singh and Anupam Kher will be seen as Pan Singh. The trailer of the movie was released on March 9, just when Dhoni and co. were playing for ICC T20 World Cup 2016. ALSO READ: MS Dhoni’s biopic release postponed

The biopic was to release on September 2 but due to certain issues has been postponed to September 30. The director of the film, Neeraj Pandey has suggested that the release has been postponed because the team wants the movie to be presented in the best possible way. The movie has lots to offer ranging from Dhoni’s cricketing career to family and personal life. Apparently, the movie also reveals his love story before he started dating Sakshi. So definitely, lot of excitement is in store. 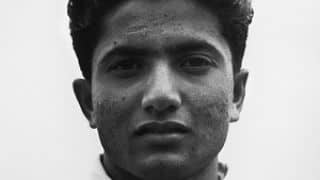