Ranchi: Jharkhand students will soon study about Ranchi-born Indian cricket team captain Mahendra Singh Dhoni, archer Deepika Kumari and ex-hockey captain Jaipal Singh Munda in the school curriculum, an education official said. The new textbooks meant for class two to eight students, will be introduced from the new academic year.  Munda was captain of the Indian hockey team in 1928 when it won the Olympic gold medal. Later, he formed the Adivasi Mahasabha, a tribal body.  The new textbooks also include mountaineers Bachendri Pal and Premlata Agrawal.  Premlata, a resident of Jamshedpur, is the first Indian woman to climb all the highest peaks in the seven continents including Mount Everest. She climbed Mount Everest at the age of 48 in 2011. IPL 2016: By picking MS Dhoni, Pune have won it off the field but need to make smart buys to triumph on-field

“Officially, we have no information. If it’s true then it’s a great pleasure for me that students of our state will study about me,” Premlata told IANS.  The textbooks also include stories of heroes like freedom fighter Birsa Munda, Siddo and Kannhu and others.  Jharkhand was formed on November 15, 2000 on Birsa Munda’s birth anniversary.  Besides, the books also contain information about rivers, waterfalls and religious places like the Shiva temple of Deoghar. The Shiva temple of Deoghar is one of the 12 Jyotirlingas in the country.

“The purpose to include stories related to sportspersons, mountaineers, freedom fighters, religious places, rivers, waterfalls is to make students aware about the history and geography of the state,” a senior official involved in textbook curriculum told IANS.  “The contribution of sportspersons has not been given proper place in the past. The aim is to not only create awareness about personalities and places but also create a sense of pride among students of Jharkhand,” the official added. 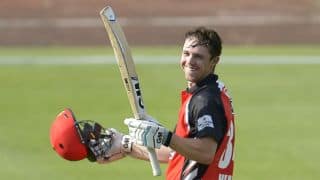 IPL 2016 auction: Travis Head could emerge among most coveted players