After the customary handshakes, Dhoni headed straight to Mukherjee's dugout and engaged in an animated discussion that lasted about five minutes.

Kolkata, Mar 1 (PTI): Former India captain Mahendra Singh Dhoni spoke to Eden Gardens curator Sujan Mukherjee about the excessive seam movement during their low-scoring encounter in which Jharkhand beat Saurashtra by 42 runs. Sent into bat, Jharkhand collapsed for 125 in 27.3 overs but Dhoni’s men managed to dismiss Saurashtra for 83 in 25.1 overs to register their third successive victory. After the customary handshakes, Dhoni headed straight to Mukherjee’s dugout and engaged in an animated discussion that lasted about five minutes. A former CAB joint-secretary, Mukherjee, who is now the curator of the wicket, said Dhoni observed that it was a seaming track on offer. But Mukherjee said that one should not read too much into their discussion.

“Yes, he said the wicket seamed a lot but he never came to complain. Even I’m not happy with the wicket. I also felt the ball moved and swung a bit more,” Mukherjee told PTI. “He came to meet me as I was his East Zone coach during his U-19 days. During his previous match, I was not here so he came to meet me.” The uneven bounce of the track saw only three batsmen from each camp posting double digits with Jharkhand’s Ishan Kishan notching up a solitary half-century.

On the precarious-looking surface, it was the seamers who ruled the roost, grabbing all the 20 wickets on offer. Mukherjee was in Mumbai for an IPL curators’ meeting yesterday as the groundsmen had watered the pitch but before it fully dried up they had covered the pitch.

“It seemed there was some moisture retention that led to ball swinging. It was one of those days. It will be fine by the next match.” Incidentally, Dhoni as Team India captain in the past had criticised the Eden wicket many-a-times and had termed it “ugly”.

Clearly, Jharkhand was unhappy with the wicket and Jharkhand coach Rajiv Kumar said: “It’s a poor advertisement of one-day cricket. You come to watch batsmen score runs for a one-day match. But here making runs became difficult. It was difficult to bat.”

If Jharkhand batsmen had a difficult stay at the crease, Saurashtra faced the worst after being dismissed for 83 with Varun Aaron (4/20) bowling his full 10 overs in one spell from the High Court end.

The odd-ball was staying precariously low while the rising deliveries were simply unplayable as he ripped the Saurashtra batting apart. After Aaron completed his spell, Rahul Shukla (4/32) exploited the conditions from the High Court end to clean up the tail in 25.1 overs.

Aaron, however, chose not to be critical of the surface.

“On this wicket we batted and bowled well. To talk about the pitch, it all depends on how you adapt. Even in International cricket you don’t get similar type of conditions everywhere.” 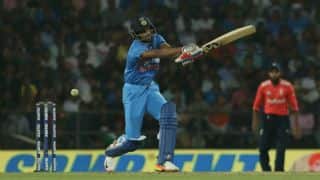 Hardik Pandya: Can bat any position in Tests