The only second cricketer who led the country to a World Cup triumph, Mahendra Singh Dhoni says he is not 100 per cent sure of playing in the 2015 edition and will decide on it two years before the mega event. 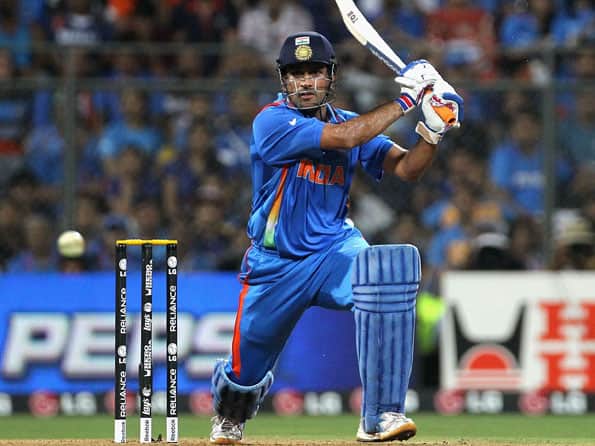 The only second cricketer who led the country to a World Cup triumph, Mahendra Singh Dhoni says he is not 100 per cent sure of playing in the 2015 edition and will decide on it two years before the mega event.

“If you see 2015, still three, three and a half years to go. I don’t really know where I will stand. Everything needs to go off well, and then by close to 2013, I will have to take a call whether I can really 100 per cent be available for the 2015 World Cup,” Dhoni said.

“You don’t want a wicketkeeper in the side who has not played at least 100-odd games, at least close to 80-100 games, going into World Cup. So that’s a call that needs to be taken.

But if everything goes off well, 2013 end will be time where we will have to carefully study the body and see what can be done,” said Dhoni, who was yesterday named CNN-IBN Sportsperson of the year.

Dhoni has held aloft every cricket trophy in the world, from Twenty20 World Cup, IPL and Champions League T20 and to 50-over World Cup, and he said he would want to win the 2015 World Cup though he is not 100 per cent certain to play in it.

“Well, why not do it all over again? If you don’t really have a dream, you can’t really push yourself, you don’t really know what the target is. It is important to stay focused, have short-term goals, not look too much in future, and try to win each and every series that is coming. Of course, you won’t be able to do that,” he said.

Asked about his hero in life, Dhoni picked his team-mate and cricket icon Sachin Tendulkar and Bollywood superstar Amitabh Bachchan.

“Well, that’s a very difficult one. There’s someone like Sachin Tendulkar, who is a part of the side, whom most of the individual cricketers look up to. And not to forget Amitabh Bachchan, who has been the biggest thing when it comes to Bollywood, and he is known the world over. So if you look at him, still, at his age, he is working, being among the best,” he said.

“So these are the two people who are ideal role models, who have struggled through their phases in life and yet come out successful. The best thing is that they are very humble and grounded, which I think is very important to be a successful person,” Dhoni said.

Dhoni said he was so emotional after winning the World Cup early this year that he wept after the summit clash along with his team-mates.

“We all want to be part of a World Cup-winning side. The last time we won was 28 years back. So most of people (in the) side wanted to win the World Cup, and as soon as we got into a position where we saw World Cup coming into our dressing room, emotions started to flow. If you see, before the post-match presentation, almost every player cried,” he said.

Asked if he also cried, he said, “Yes, I did. You don’t have footage of that. It’s very difficult to control emotion like that. I was controlling (myself). I wanted to quickly go up to dressing room, and I saw two players crying and running to me. All of a sudden, I started crying, and I looked up and there was a huddle around me. And each and every one cried.”

About the pressure on Indian players to win the World Cup, Dhoni said, “I still remember playing the Australia quarter-final. People thought that was the biggest game when it came to the World Cup. Then it was Pakistan in the semi-final. I remember travelling and people were like, “Win this game and we don’t care about the finals.”

“As soon as we won the semi-final, it was like, “You have to win this because it doesn’t matter what you’ve done. If you don’t win the final it won’t be really nice.” So I think there was pressure, which was the ultimate thing,” he said.

Dhoni said he loves to live in the present.

“I love being in present. When I was playing for school, the only thing I wanted was get selected for U-16 or U-19 district teams. When I was selected for district I would think of next level, getting selected for state side. I’m a person who lives in the moment,” he said.

“Frankly, I never thought I would represent my country one day. Now I’m leading my country, so it’s like a fairytale.

I never thought I’d do these things. I lived in the moment, I kept working hard. I never expected to get a call for Indian cricket team in the very next meeting,” said Dhoni.

Asked how he spends his time at home in Ranchi when he not playing cricket, Dhoni said, “I love to go back to Ranchi.

I have three dogs at home. Even after losing a series or winning a series, they treat me the same way. Getting up quite late in the morning, going to clean my bikes, spending some time with my family, my parents and friends, going out for rides with my friends and having lunch or dinner at a roadside hotel – that’s my favourite time-pass.”

He credited his parents for what he is now as they had not interfered in his pursuit for cricket.

“My parents were never against the sport. Time management was very important, and four to six was the time I played in winters. Summer, the days being longer, you could play for a bit longer. They never told me not to play. That was the crucial period, if there was any stoppage from parents, that would have been very difficult. So, parents, I think, are very special. And each and every friend who helped me go through the bad phases in life,” he said.

Asked which one is more difficult between winning the World Cup and getting married, Dhoni said, “I think both of them are quite difficult to do. Because, all of a sudden you have someone in your life who lives with you 24 hours and you have to adjust to her and she needs to adjust to your kind of living.

“And I think the first six months goes by trying to understand each other a bit better. Being girlfriend and boyfriend, okay, you are (talking on) the phone for most of the time, but being together for 24 hours, you have to change your lifestyle.”(PTI)

MCA passes resolution to back Sachin Tendulkar for Bharat Ratna