MS Dhoni and Virat Kohli on Wednesday spread the message of 'Save the Girl Child' at an event at the Feroz Shah Kotla stadium.

New Delhi: A bevy of cricket stars including MS Dhoni and Virat Kohli on Wednesday spread the message of ‘Save the Girl Child’ at an event at the Feroz Shah Kotla stadium. It was orgnaised under the aegis of the Central Delhi district administration as per the information, education and communications provisions of the Pre-Conception and Pre-Natal Diagnostic Techniques Act (PC&PNDT). The event was held during the practice session of the Indian cricket team ahead of the ODI match against New Zealand on Thursday. Full Cricket Scorecard, India vs New Zealand, 2nd ODI

30 girl students from Rajkiya Sarvodya Kanya Vidyalya, Jama Masjid, participated in the event. Apart from Dhoni and Kohli, Jaspreet Bumra, Umesh Yadav and coach Anil Kumble interacted with the girls. “Virat Kohli discussed the issue of female foeticide with the girls and autographed the ‘Save the Girl Child’ caps for the girls as souvenirs,” a statement said. For Virat Kohli, loyalty is paramount in relationships and that is why he believes that his bond with childhood coach Rajkumar Sharma and his IPL team Royal Challengers Bangalore (RCB) is forever. In relationships, I always look at loyalty. From 1998, I had only one coach [Rajkumar Sharma] and that s never going to change. I have played for one franchise in the IPL [RCB] and that s also never going to change, Kohli said at the launch of a new book on him Driven written by veteran journalist Vijay Lokapally. Kohli: I had only one coach and that is never going to change

He [Sharma] is the only person I am scared of a good scolding. I can t say anything to him even now and it comes from respect. And it s always good to have someone like that, said Kohli. Virender Sehwag, who has now become a rage on micro-blogging site twitter regaled the audience with an anecdote from Kohli s formative years with the Delhi Ranji team. Sehwag remembers it even more as he was told that this new kid will surpass him. 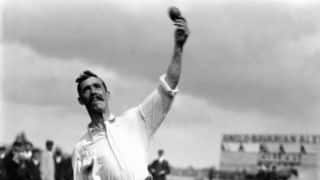