India will play a tri-series in Australia, against the hosts and England just before the World Cup.

India captain MS Dhoni said his side’s pacemen would need to hone their skills bowling in the ‘slog-overs’ if the world champions were to defend their title in Australia and New Zealand early next year. Dhoni’s men suffered a 41-run defeat by England in the fifth and final one-day international at Headingley on Friday but still took the series 3-1 after a trio of crushing wins.

India repeatedly exploited England’s longstanding weakness against spin bowling and might well have done so again on Friday but for Joe Root’s 113 on his Yorkshire home ground. For once India’s batsmen proved unequal to the chase, despite a fine fifty from Ambati Rayudu and a dashing 87 from Ravindra Jadedja

“Three hundred was par score today, and we gave away quite a few soft wickets in the middle order. We lost too many wickets and were not in position to chase the runs, so those dismissals really cost us the game, ” said Dhoni.  The likes of pacemen Bhuvneshwar Kumar and Mohammed Shami were able to take early wickets and then let the spinners take over for much of the series. It was a tactic that worked well until Friday, when England belatedly made use of the batting powerplay by scoring 55 runs for no wickets in the designated five overs.

However, pitches and overhead conditions are likely to be very different ‘Down Under’ when the World Cup starts in February, although India will first have the benefit of a tri-series in Australia also featuring England. “I think slog bowling is something which I would like to improve as a team because the conditions in Australia and New Zealand will be very different. In New Zealand, there are not many games [for India] but the grounds are not very big. So we cannot use spinners too much after the 40th over,” said Dhoni.

“To some extent it will put extra pressure on the fast bowlers to stand up and take more responsibility. It’s really important for them to use the coming games well but at the same time, the next five [ODIs at home] against the West Indies, we will get a fair amount of dew so they might find it tough to execute their yorkers or may not find their reverse swing — it won’t be exactly what we may face later in Australia and New Zealand,” Dhoni further added.

But having seen Shami take two for 52 in 10 overs at Headingley, Dhoni indicated he had the discipline he was seeking from his pacemen. “His execution was great, which I feel is lacking in some of our other fast bowlers.  But definitely he bowled really well with his yorkers. Whenever I needed him or asked him he really bowled well,” Dhoni added. 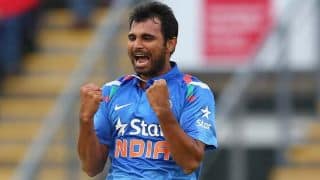