MS Dhoni will be 33 by the time the World Cup starts in Australia and New Zealand.

Mahendra Singh Dhoni is not averse to the idea of continuing as the skipper of the Indian cricket team in all the three formats, saying it would be unfair to burden a new player with the mantle of captaincy with just one year left for the World Cup.

“I think, it’s a point of no return with the World Cup literally one year away from now. It won’t give a new guy the ideal time to play, at least, 70-80-90 games beginning to the World Cup that’s what we would like to have him play before the World Cup”, Dhoni said.

“I understand the pressure, it’s not always that you turn up and at the same time, you get the kind of things which give you more experience than the others. So, we have to go through it,” he said at a promotional event.

Dhoni, India’s World Cup winning captain was responding to a question on giving up captaincy in one of the formats to prolong his career.

Dhoni had, last year, said that he might have to give up a format to lead India‘s title defence in 2015 but such a decision would be made only at the end of 2013.

Dhoni will be 33 by the time the World Cup starts in Australia and New Zealand.

The skipper said he is feeling a lot fitter and healthier than ever.

“I was really fortunate to see where I am right now with the amount of cricket that we are playing these days. As of now, it’s looking good. The body is closely knit together. How it will be [in future], I don’t know but so far so good,” he said. 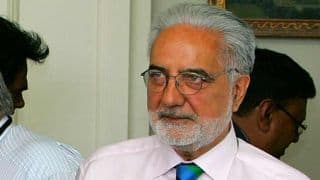