Ian Chappell added MS Dhoni is a leader having a glittering pedigree in the short forms of the game.

Melbourne: Former Australia captain Ian Chappell feels the Indian team will be quite a handful for world champions Australia in the upcoming ODIs but the hosts will still be the favourites to win the five-game series as the visitors are short of one specialist batsman. Chappell, in his column for ‘The Daily Telegraph’, said India are short of a specialist batsman in the touring squad and their fast bowlers are likely to be tested quite a bit by the Australian batsmen on the bouncy conditions here. “Following a lacklustre Test season, the public is thirsty for some meaningful contests. What looms is a battle between the current [Australia] and previous [India] ODI World Cup holders. MS Dhoni will provide a true test for Australia and Steve Smith,” Chappell wrote. READ: MS Dhoni never summoned by court over controversial ad, says manager Arun Pandey

Talking about the two captains, Chappell said, “While Steve Smith has proved to be a successful Test captain, he’s up against MS Dhoni, a leader who has a glittering pedigree in the short forms of the game. Dhoni is a cagey player and captain in these versions, with a World Cup and a World T20 trophy on his CV. As the next major T20 tournament will be held in India (where he claimed the 2011 World Cup), he has every right to feel confident about his team’s chances. However, Smith will be buoyed by Australia inflicting a heavy defeat on India in the last World Cup semi-final.”

“India has the big names and the talent to push Australia but I don’t see them beating the home side, as both teams ramp up their quest for another world title [World T20 in March-April in India],” he said. “Australia will have a psychological advantage in the first two contests,” he added. Chappell, however, questioned the non-inclusion of fast bowler James Pattinson in the Australian squad for the first two ODIs to be played at the WACA in Perth and the Gabba in Brisbane on January 12 and January 15 respectively.

“If Australia is looking to inflict serious psychological damage on India prior to World T20, then why not unleash aggressive Pattinson on the bouncy WACA and Gabba? Especially as India’s batting line-up, while talented, is one specialist short,” said 72-year-old Chappell who played for Australia in 75 Tests and 16 ODIs between 1964 and 1980. READ: Ian Chappell criticises Australia’s decision to keep Nathan Lyon out of ODI series vs India

“Australia, on the other hand, has a deep line-up. Mitchell Marsh, Glenn Maxwell, Matthew Wade and James Faulkner can all either capitalise on a fast start from dashing David Warner and Aaron Finch, or resurrect an innings that has gone awry at the top,” he said.

Chappell said India are also handicapped by the lack of all-rounders and they may struggle if their batting top-four do not deliver, “India does not have the luxury of numerous all-rounders. While they have a very talented and aggressive top four, headed by Virat Kohli and Rohit Sharma, if they lose early wickets they then have to play conservatively,” Chappell said.

“This makes Australia the team most likely to post a huge first-innings target, with India’s best chance of victory coming in a tight run chase where Dhoni produces a trademark well-timed finishing flourish. If Australia only manage to set India reasonable targets, then the likes of Rohit and Kohli are more than capable of setting the table for Dhoni to demolish the spread,” said the former captain.

Cheppell said the Australian batsmen could have the upper hand against the Indian fast bowlers in home conditions, “In the 2011-12 WACA Test, Warner scored a blazing 180 and a couple of the current Indian fast bowling attack were on the receiving end of that slaughter. In addition, Finch and Smith left a mark on the Indians in the World Cup semi-final win at the SCG. Once again it was the Indian fast bowlers who were plundered,” he wrote.

“Both Warner and Finch are capable of pulverising the often wayward pace bowlers and, if this happens, India will find it difficult at the WACA and the Gabba to reverse the trend with their spin bowling trumps. The likely plan for Australia in this series will be to plunder the faster bowlers and milk the spinners. India, on the other hand, will be searching for chinks in the Australian armour on this tour, safe in the knowledge that they already have a blueprint for victory in home conditions.” 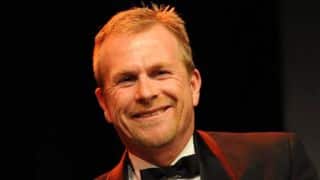