Don’t forget Dhoni. He knows a thing or two about winning, having won World T20 once and the 50-over World Cup.

How can there be a favourite to win a lottery! That’s Twenty20 and you can put your money on anyone. On the day India beat Bangaldesh to win the Asia Cup in Mirpur, the Australians chased down South Africa’s 205-run target in Johannesburg. Both the matches were tantalisingly close except that Mahendra Singh Dhoni made it look easy with a flourishing finish whereas the Australians got there with sensible hitting and running between the wickets in the last over. Pundits and former cricketers have ticked all boxes to give India the best chance of winning the World T-20 the qualifiers, from which two teams will join the eight Test-playing nations in the tournament proper, got under way on Tuesday. ALSO READ: ICC T20 World Cup 2016: MS Dhoni calls for India to not take things for granted

Before the last 50-over World Cup Down Under there was speculation whether the One-Day format can survive in the face of the mushrooming growth of Twenty20 leagues around the world. Some even thought the Tests were also in danger. VVS Laxman: Presence of other finishers in India has made life easier for MS Dhoni

Eventually, the consensus was that there is space for all three formats provided they are played and sold properly. The players are striving hard to keep Test cricket going with entertaining batting, exciting fast bowling and imaginative spin. If any format is in danger, it is the 50-overs and that the administrators have made sure it remained relevant by keeping the Twenty20 internationals to a bare minimum.

The players still swear by Tests, and yet they have realised that the shortest format has become the stepping stone even to attain Test fame. Even those who are not counted for shorter formats are unhappy for missing out the excitement. Their grouse is that they are unfairly getting branded as Test cricketers. Likewise, the players seen as good for bang-bang and four or ten over spells are sore that they are not getting a Test call-up. Only a few are accepted in all the formats.

The conformists have grudgingly accepted that T20 has come to stay even if it is a crude contraption corrupting a gentlemen’s game. They have taken it as part of the game because there are batsmen who score with pure cricketing strokes and bowlers who still stick to the basics to impress the purists, who otherwise fear that cricket bats resemble baseball bats and golf clubs, hitting the ball a long distance.

Twenty20 is exciting when played with normal boundaries on big outfields as both the batsmen and fielders are made to run and chase at a frenetic speed. These traits have made the other formats as thrilling.

Funny things are happening in shorter formats. Flat pitches in Australia saw India and Australia scoring 600 runs in a 50-over match and seaming pitches in Bangladesh made chasing 130-140 totals too tight to chase in Twenty20 Asia Cup. In South Africa, 200 plus looked not too difficult to attain.

In India, you can get different pitches for World T20, considering the weather conditions, but by and large they can’t be vastly differtent as the summer has already showing its effect. The easiest way to predict a winner is that whoever does well on dry tracks will carry the day.

The International Cricket Council (ICC) tournament is being played a couple of months before the time the Indian Premier League (IPL) is played normally and every major team has players who know these conditions as they have been part of the popular league for quite some years.

So, it all boils down to the best balanced side and that appears to be India after their recent performances in Australia and Bangladesh. A settled team alone doesn’t guarantee championship victory. All that a team needs is one big knock with others chipping in usefully.

These big knocks can come from the top-order batsmen with most of them capable of slogging huge sixes. The ability to hit big is going to be the determining factor.

When it comes to bowling, it is no longer containment alone. The captains have to be innovative to make the best use of the four overs a bowler has. Finally, outcricket. Saving a run is as good as scoring two and the Indians have young legs, which can provide cover for the senior citizens in the side.

There is no gainsaying that the Indians get the top billing because they are playing at home. Is that all to it? No, the Indians look good, seeing the depth in both batting and bowling. And they are well drilled for the big occasion. Don’t forget Dhoni. He knows a thing or two about winning, having won World T20 once and the 50-over World Cup. 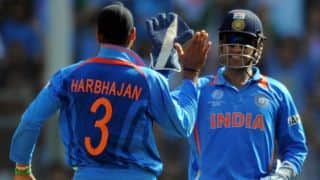