Sports Minister Kiren Rijiju stated that BCCI should stand with Indian legend and his identity is the country s identity.

Adding further support to MS Dhoni, after ICC objected to him sporting a Special Forces insignia, Balidaan in his wicketkeeping gloves, newly-appointed Sports Minister Kiren Rijiju stated that BCCI should stand with Indian legend and his identity is the country s identity.

“I am hopeful that BCCI will take up this matter with ICC and will solve this matter. M S Dhoni’s identity is country’s identity, army’s identity and it is not politics. So, BCCI should stand with Dhoni,” said Rijuju as reported by ANI.

“I would like to request BCCI to take up matter with ICC properly and if necessary inform the government accordingly,” he added.

The Balidaan Badge or the Army insignia was spotted on Dhoni s gloves as television replays showed him stumping Phehlukwayo in the 40th over of the innings bowled by Yuzvendra Chahal. ICC requests BCCI to remove army insignia from MS Dhoni s gloves 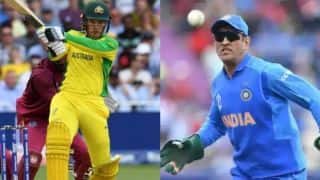