MS Dhoni's style of wicketkeeping has never been purely classical but it has worked wonderfully well for him, feels India's fielding coach R Sridhar.

MS Dhoni‘s style of wicketkeeping has never been purely classical but it has worked wonderfully well for him, feels India’s fielding coach R Sridhar. Dhoni is not big on keeping drills during training sessions but amazes all and sundry with some swift stumpings and flash run-outs.

Dhoni has got his own style, which is so successful for him. I think we can do a research into his style of wicketkeeping and I would like to call it The Mahi Way . There are so many things to learn from that and so many things that other young keepers may not even be able to contemplate. He is unique in his own way and that is exactly how cricketers should be unique in their own way, the fielding coach lavished praise on the former India captain.

He has got great hands. He has definitely the best glovesman as far as keeping for spinners goes. His hands work at the speed of lightning, for stumpings we all know that. That is something which is very innate to him and great to watch. At the same time, for somebody who doesn t have that skill, it s a big challenge to get there,” Sridhar stated.

India have a poor record at St. George Park, having never won an ODI here in five attempts. But they are still in with a golden chance of making history as they stand on the cusp of a first-ever ODI series win on South African soil.

There is worry though in the form of the middle order, given that the batting has been too reliant on Kohli and Shikhar Dhawan in this series. The whole endeavour is to look at the state of the game and see which player can be the best at that particular situation. And to give our other batsmen, apart from obviously MS, a chance to go there, take the responsibility and take the game till the end.

“We want more finishers, we want to train and groom more finishers. At the same time we also want our nos. 5,6,7 to be able to go in, learn the situation and adapt to it. That is why you see the rotation, but very soon I think we will be settling into a fixed 5,6 & 7 as we get closer to the World Cup, Sridhar said. 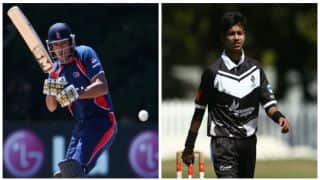 Ted Barratt takes all 10 Australian wickets but gets duped