India‘s chief selector MSK Prasad has labelled India’s current bowling attack as “one of the best” to tour South Africa ahead of the tour. In the bowling arsenal, India have a pace-heavy attack in Bhuvneshwar Kumar, Mohammed Shami, Umesh Yadav, Ishant Sharma, Jasprit Bumrah, Hardik Pandya. In addition, they have ‘Test specialists’ Ravichandran Ashwin and Ravindra Jadeja to handle the spin department.

Bhuvneshwar ended 2017 with a Test bowling average of 21. Shami, on the other hand, picked up 19 wickets from 5 Tests. Umesh accounted for 31 scalps in 10 Tests in the calendar year, apart from clocking over 140 kmph consistently. Ishant claimed 14 wickets with an economy rate of 2.94.

“I can’t comment on the opposition bowling attack but from our perspective we have one of the best bowling attacks that has toured South Africa. You see Umesh (Yadav) and (Mohammed) Shami might be hitting 140 but they still swing the ball. We also have Bhuvi (Bhuvneshwar Kumar), who can swing the ball either way. We have included (Jasprit) Bumrah, who has variety. Ishant (Sharma) is there always and Hardik (Pandya) adds that different dimension.

So there are five different varieties of bowlers that we have picked.The confidence we have with so many victories in Test matches, though they have come at home but still..going on a winning note is always good. So I am sure this is one of the most balanced teams that we have,” sounded an upbeat Prasad.

Bumrah has been India’s most successful bowler in limited-overs this year: he has 51* wickets from 39 ODIs and T20Is combined. Pandya, on the other hand, has been slightly expensive but has been getting vital breakthroughs at regular intervals.

Prasad is not at all concerned about Ajinkya Rahane’s recent slump in form. Rahane managed 17 runs in five innings against Sri Lanka even less than Bhuvneshwar and Shami.

“It’s a wonderful bunch and more importantly we are going with No. 1 Test tag. We are not worried. When we go abroad, he is a key player. If you see his performances abroad, you should appreciate. He has got runs across the world. I am absolutely not worried. He is above these things and he has played enough number of years to tackle these situations,” concluded Prasad. 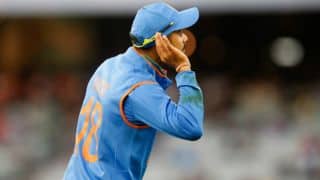