Describing her journey of last 10 years with Mumbai Indians as "truly magical and memorable", Nita said for her the last decade is filled with "emotions which had a huge impact on our life" and that she "will not trade these 10 years for anything else."

Reliance Industries chairman Mukesh Ambani has said that his wife Nita Ambani, has built a bigger brand in Mumbai Indians than the company. A founding member franchise of IPL, Mumbai Indians (MI) is a two-time winner of the T20 League in 2013 and 2015 and an equal number of Champions League T20 titles. Describing her journey of last 10 years with Mumbai Indians as “truly magical and memorable”, Nita said for her the last decade is filled with “emotions which had a huge impact on our life” and that she “will not trade these 10 years for anything else”.

“I have to congratulate Nita. A lot of us at Reliance say that we are very proud of what Reliance has done over the years, but I think with both her school (Dhirubhai Ambani International School) and cricket (Mumbai Indians) Nita has built a bigger brand for Reliance, said Mukesh while addressing a gathering of past and present cricketers and MI players on the occasion of franchise’s 10 years’ celebration here, a media release from the franchise said today.

Mumbai Indians came silently and unexpectedly in our life and now it has become an integral part of all our feelings and our being. It has been one of the most beautiful journeys that presented us, 10 years of wonderful memories. 10 years of new friendship and bonding, and 10 years of prayers, but we will not trade these 10 years for anything else, she said.

Crediting MI’s first IPL title win to team’s former mentor Anil Kumble, who is the current India coach, Nita said, “It was under Anil’s mentorship that we won our first IPL trophy in 2013. “I would also like to acknowledge the contribution of legends like Ricky Ponting, Shaun Pollack and Zaheer Khan, and of course our winning captains Harbhajan Singh and Rohit Sharma, she said.

Nita also congratulated Sachin Tendulkar, Harbhajan and Lasith Malinga for completing 10 years with the IPL franchise, calling the trio as three pillars of the team. She also said that the Tendulkar is an inseparable part of MI forever.

“10 is a very auspicious number. 10 is associated with 10 avatars, 10 commandments, 10 gurus of Sikhism, 10 card of tarot that stands for the wheel of fortune and for Indians, 10 means Sachin Tendulkar. From the beginning, Sachin is an inseparable part of Mumbai Indians, for 10 years, now and forever.

“I thank my husband Mukesh for challenging me to take up a role that I was not ready for and neither qualified to do. It was his unconditional faith in me that inspired me to understand the game of cricket, to build and inspire a winning team,” Nita said.

“Today, as a mother what more can I ask for. As I pass on the baton to my son Akash, who has literally grown up with the family of Mumbai Indians for the last 10 years, I feel very proud. I am sure with his passion and knowledge of the game he will take the team to even greater heights,” she concluded. 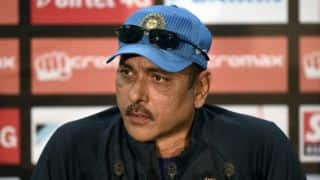