Tamil Nadu rode on a gutsy half-century from India's reserve opener Abhinav Mukund to take a vital 69-run first-innings lead against Delhi on the second day of their third round Ranji Trophy Elite Group match at the Feroz Shah Kotla. 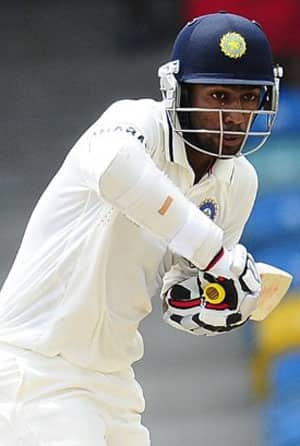 Tamil Nadu rode on a gutsy half-century from India’s reserve opener Abhinav Mukund to take a vital 69-run first-innings lead against Delhi on the second day of their third round Ranji Trophy Elite Group match at the Feroz Shah Kotla.

Mukund returned to the dressing room with an unbeaten 89 while Jagannath Kaushik was batting on eight as Tamil Nadu finished the day on 281 for eight on a treacherous Kotla wicket.

Earlier in the day, when the visitors read 69 for three, a ball from left-arm seamer Pradeep Sangwan nastily shot up from a good length spot and broke the wiser of Mukund’s helmet, the batsman was seen in unbearable pain and play was stopped for about five to seven minutes before the opener walked out of the field with a bruised jaw.

Mukund, however, returned to crease at the fall of sixth wicket and manfully shouldered the burden of Tamil Nadu’s innings, reaching his individual 50 and also taking the visitors past Delhi’s total of 212 runs.

Mukund faced 157 balls during his 253-minute stay at the wicket while hitting 15 boundaries.

Out-of-favour India pacer Ashish Nehra, who was drafted into the Delhi team after the innings defeat to Gujarat, bowled a good first spell as he almost got Murali Vijay out with an inswinging delivery, but umpire Amish Sahiba ruled in favour of the batsman.

Vijay though didn’t last long as a shooter from Nehra found him trapped in front of the wicket.

The veteran bowler was on hat-trick as he got rid of Arun Kartik in the very next ball to leave Tamil Nadu struggling at 35 for two.

Nehra ended the day with figures of two for 70 in 18 overs while Nehra had two for 64 in as many overs.

There were serious concerns about the Kotla pitch as it was the same end from where Vijay got a shooter and Mukund got a snorter.(PTI)