The PCB finalised the decision after the franchise's owners failed to pay their annual fee of USD 5.2 million.

Pakistan Super League team Multan Sultan s franchise rights have been terminated by the Pakistan Cricket Board. The development comes just nine days prior to the PSL auction and the PCB finalised the decision after the owners failed to pay their annual fee of USD 5.2 million.

Dubai-based company Schon Properties won the rights to Multan Sultans last year for an eight-year-long tenure, but they has failed to meet the financial obligations. It will likely be up for resale again before the start of the PSL next year, and until then, the franchise will simply be known as a ‘sixth team’, with its operations being handled by the PCB till a new owner is found. The new owner will also have the privilege of opting for a new name if desired.

“While this is an unfortunate turn of events, we have to ensure strict adherence to contractual obligations for the well-being of the PSL,” PCB chairman Ehsan Mani said. “We wish Schon Group well with their future endeavours.

“I want to reassure our partners – franchisees, sponsors, players, coaches and fans – that the PSL will take place as planned. Our preparations are in full swing starting with the PSL Draft in Islamabad. The 2019 edition of the PSL will be a memorable one with as many as eight matches including the playoffs and the final scheduled to take place in Pakistan.

“Schon Group has been a partner of PCB for many years in terms of Pakistan series sponsorship abroad for many years. The PCB appreciates that Schon Group was the only bidder to meet the Reserve Price ($5.2 million per annum) it had set for the sale of the Multan Franchise. This was double the amount for which PCB had in 2015 sold the most valuable PSL Franchise Team. Asher Schon in particular has worked hard in building the Multan Sultans brand.”

The decision however, will have no impact on the auction scheduled to take place on November 20 in Islamabad. Without any owner, the PCB is likely to involve the team management, led by former Pakistan fast bowler Wasim Akram to look after its operations.

“It has been a privilege being a PSL team owner over the past year,” Asher Schon, the former Multan Sultans owner, said in a statement. “I am proud of the support Schon has always extended to Pakistan cricket and current affairs notwithstanding, will continue to passionately support it.”

Multan Sultans played the 2018 season of the PSL, winning four games out of ten matches and finishing second from bottom with nine points. Shoaib Malik was named captain of the franchise ahead of the 2018 edition of the PSL. 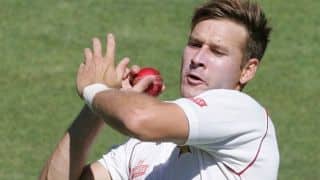