Baroda and Maharastra got off to a losing start in Syed Mushtaq Ali Trophy 2016-17 Trophy here on Sunday.

Skipper Aditya Tare smashed a quickfire 79 while Ajinkya Rahane returned to form with a fluent 78 as Mumbai beat Baroda by 6 runs in a high-scoring West Zone match of the Syed Mushtaq Ali Twenty20 tournament here on Sunday. Mumbai first rode on Rahane and Tare’s exploits with the bat to post 211 for 3 on the board and then restricted an equally potent Baroda to 205 for eight to register the win. Asked to bat, Mumbai lost Shreyas Iyer early before Rahane and Tare joined hands to stitch a commanding 152-run stand for the second wicket to lay the foundation for the score.

Out of India’s squad who is currently facing England in the three-match series in T20Is, Rahane roared back to form scoring his runs off just 53 balls with the help of 11 boundaries and one hit over the fence. Tare, on the other hand, was a tad faster than Rahane in piling up his runs off just 41 deliveries with five fours and as many sixes. Shivam Dubey also used his long handle to great effect towards the end scoring 37 unbeaten runs off just 13 balls, a knock which was studded with two boundaries and four hits over the fence. Tendulkar, Ganguly, Bindra inaugurate India’s first multi-sport museum

Left-arm medium pacer Rishi Arothe (1 for 51) was the only successful bowler for Baroda as two other Mumbai batsmen were victims of run outs. Chasing the steep target, Baroda gave Mumbai a run for their money before eventually falling short. Vishnu Solanki (69 not out off 34) was the star for Baroda with the bat, while Swapnil Singh (35) and opening duo of Miten Shah (33) and Kedar Devdhar (31) also made significant scores.

However, Baroda were completely let down by their star players — skipper Irfan Pathan and his brother Yusuf Pathan — as they failed to crack with both bat and ball. For Mumbai, veteran leg-spinner Pravin Tambe (3 for 26) picked up three wickets, while Shivam Dubey (2 for 6) snared two wickets in the one over he bowled in the game.

Meanwhile in another West Zone encounter, first-time Ranji Trophy champions Gujarat defeated Maharashtra by 5 wickets. Opting to bowl, Gujarat restricted Maharshtra to 154 for 7 and then chased down the target in 18.5 overs with 5 wickets in hand. 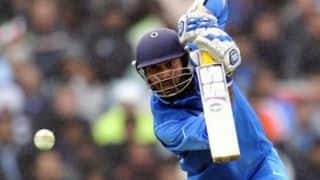 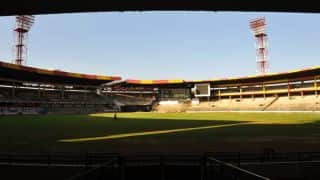