Ratnakar More complained of chest pain and uneasiness during an inter-devision match.

Tata Power’s Trombay Station cricketer Ratnakar More passed away on Mumbai’s Oval Maidan after suffering a cardiac arrest during a tournament organised by the employers on Tuesday.

More complained of chest pain and uneasiness during an inter-devision match. He was taken to the Bombay Hospital, where he was declared dead and the reports confirmed there were three blockages in his heart.

The 29-year-old is survived by his wife, posted at the Azad Maidan Police Station. An officer from the station told DNA, “We have registered a case of accidental death in the matter. His wife works as a constable with the Azad Maidan police and is seven months pregnant.”

The tournament was cancelled after the death of the cricketer. A player said, “We came to know about it at 12 pm. More complained of uneasiness and pain in chest during the match. He was taken to Bombay Hospital immediately. Unfortunately, he did not survive,” said the player.

The tournament is organised by Tata Power since last 20 years, and has been approved by the Mumbai Cricket Association (MCA). 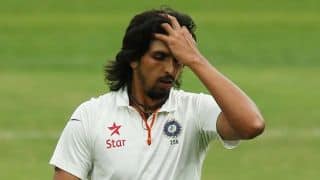