MI ended on the winning side after CSK made an error in the slog overs.

Mumbai won by 6 wkts
Man of the Match: Hardik Pandya

Mumbai Indians (MI) beat the Chennai Super Kings (CSK) in their Indian Premier League (IPL) 2015 encounter at the MA Chidambaram Stadium, Chennai by six wickets. MI were well on course during their run-chase but a good performance by the CSK spinners brought them back in the game. However, some heroics by Hardik Pandya helped MI pull off a victory. With this victory, MI have entered the top four in the IPL 2015 points table, whereas CSK remain at the top. Live cricket score and updates: Chennai Super Kings vs Mumbai Indians, Match 43 IPL 2015

Chasing 159 to win, MI started very well with Parthiv Patel and Lendl Simmons taking control. Both batsmen were attacking in their strokeplay and helped MI score 84 in the first ten overs. MI only had to get 75 in the last ten and that wasn’t a big challenge for them. However, that is when the CSK spinners came into play, tying the batsmen in knots. Parthiv and Simmons were playing through the line, but Ravichandran Ashwin accounted for both of them in the 11th over, the turning point in the game.  Live Scorecard: Chennai Super Kings vs Mumbai Indians, IPL 2015

Ashwin made his presence felt on comeback taking two for 17 in his four overs. Ravindra Jadeja also did well to conceded only 27 runs in his four overs. Pawan Negi went for only ten in his three overs in the middle. From over no 10 onwards, the boundaries dried up and Mi were struggling. Kieron Pollard was promoted to No. 4 but did not last long. CSK kept building the pressure through their spinners as there was a seven-over long spell where MI did not score a boundary. That was ultimately broken by Ambati Rayudu, who smashed two sixes in the 17th off Ashish Nehra.

Rohit Sharma had a tough stay in the middle and although he was given a life with a rare drop by Faf du Plessis, he could not capitalise on it and was dismissed in the 18th over. Dwayne Bravo continued his good run in the slog overs as he bowled a very tight spell, accounting for Rohit’s dismissal. Negi was brought in for the penultimate over with MI needing 30 runs. Pandya smashed him for three sixes, which put MI on course. Rayudu ended the over with another six, making it 25 off the over. The last over was a mere formality.

CSK had done well to score 158 for five in their 20 overs after winning the toss and electing to bat first. Although CSK had a good start courtesy their openers, they lost a few quick wickets, which stalled their progress. MS Dhoni held the innings together with a calm 39 not out. However, it was Negi who made the real difference with a strokefilled 36 off 17 balls. Negi continues to impress in the tournament with his exuberance of youth. His fearless approach helped CSK score quick runs and push their score above 150. In the end, it was not enough as MI sealed victory.

Man of the Match: Hardik Pandya. 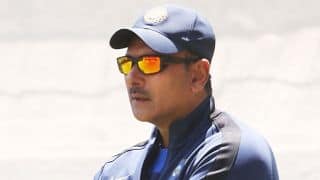