Skipper Harbhajan Singh produced an impressive spell of three wickets to help Mumbai Indians bundle out Trinidad and Tobago for a paltry 98 in their Pool A Champions League Twenty20 match. 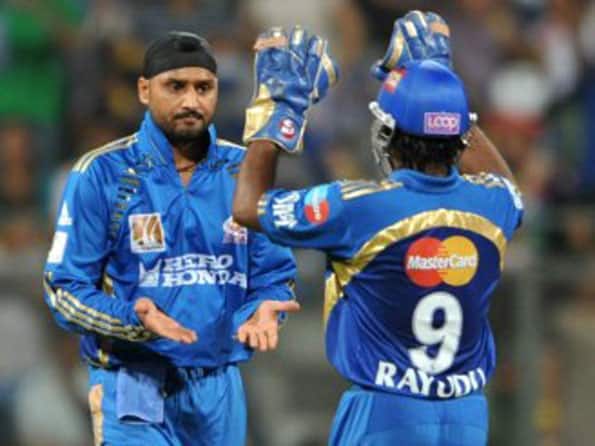 Skipper Harbhajan Singh produced an impressive spell of three wickets to help Mumbai Indians bundle out Trinidad and Tobago for a paltry 98 in their Pool A Champions League Twenty20 match.

Harbhajan, who went wicketless in their opening match against Chennai Super Kings, was effective right through today and claimed the wickets of Denesh Ramdin (0), Darren Bravo (18) and Sherwin Ganga (2) to set up the match for his team.

Sri Lankan pacer Lasith Malinga also chipped in with two wickets for 22 runs, while Abu Nechim, James Franklin and Kieron Pollard too accounted for one wicket each to help their team’s cause.

For the visitors, Jason Mohammad top scored with a 27-ball 23, studded with a four and a six.

Electing to bat, the Caribbean outfit looked set for a blazing start with opener Adrian Barath (11), who was in a punishing mood from the word Go, blasting a couple of fours in the first over off Malinga.

However, the Sri Lankan pacer came back in his second over and uprooted his stumps with a beautiful yorker to deal the first blow.

Lendl Simmons (21) too stared off well, cracking a couple of fours and a six, but he soon run himself out in a ridiculous manner in the fifth over.

Bravo, who is touted to be the cog in the Trinidad and Tobago’s attacking wheel, blasted a couple of sixes to help them reach their first fifty.

But Franklin removed Darren Ganga at the other end with Rajagopal Sathish taking a good catch as the visitors slipped to 57 for 3 in seven overs.

Thereafter it was left for Harbhajan to continue the damage as he struck thrice in his next three overs to reduce the visitiors to 78 for six in 12 overs.

Once the top and middle order collapsed, the Caribbean outfit never really recovered with wickets falling in quick succession.

Mohammed (23) tried his bit and picked up a four and a six but Malinga in his second spell trapped Kevon Cooper in front of wicket to futher reduce them to 83 for seven.

Next Aiden Blizzard’s smart fielding sent Ravi Rampaul back to the hut, while Mohammad was dismissed by Kieron Pollard in the 16th over.

Mumbai Indians, who had been brilliant on the field tonight, finally brought the curtains down on TT’s innings with Yuzvendra Chahal taking a stunning catch off Nechim to dismiss Sunil Narine. (PTI)

Four arrested in Indore for illegal betting on CLT20